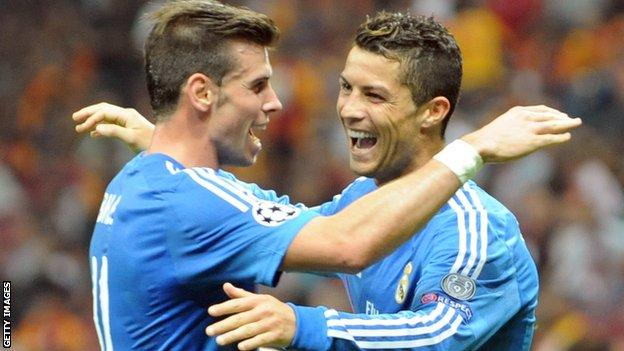 Gareth Bale is expected to make his home debut for Real Madrid when the Spanish giants host Getafe on Sunday.

The world's most expensive player, 24, made a goalscoring debut in last weekend's 2-2 draw at Villarreal.

But the Welshman, who signed from Tottenham in an £85m deal, dropped to the bench for Tuesday's Champions League win at Galatasaray.

Team-mate Cristiano Ronaldo is set for his first Bernabeu appearance since agreeing a new five-year contract.

The Portuguese forward scored a hat-trick as Los Blancos thrashed Turkish champions Galatasaray in the 6-1 victory in Istanbul.

Now Real are aiming to return to winning ways in La Liga after dropping points for the first time this season in the stalemate at Villarreal.

New coach Carlo Ancelotti, who replaced Chelsea-bound Jose Mourinho in the summer, says he is pleased with his team's start to the season but warned they must begin with "more intensity" against neighbours Getafe.

Roma captain Francesco Totti says his team can handle the pressure as they look to extend their stunning start against cross-city rivals Lazio on Sunday.

The Giallorossi, under the guidance of new boss Rudi Garcia, have won all three of their opening games and are level with Napoli at the top of the Serie A table.

"A long time had passed since we last had such a good start," said 37-year-old Totti, who has just signed a new two-year contract with his boyhood club.

"The derby is a different game from any other but we know what to expect."

While the Rome derby takes centre stage, there is another key fixture as Napoli travel to AC Milan.

New boss Rafael Benitez has won all four of his games in charge of the early leaders since leaving Chelsea in the summer.

Two of European football's newest financial heavyweights face each other for the first time this season as Paris St-Germain host Monaco in an eagerly anticipated Ligue 1 clash.

The two teams are expected to dominate French football between them this season after spending heavily over the summer.

Qatari-backed PSG paid £55m to sign Uruguayan forward Edinson Cavani from Napoli, while the Russian-backed side from the principality captured Colombia striker Radamel Falcao from Atletico Madrid in a £50m deal.

Claudio Ranieri's unbeaten Monaco side lead the early table after taking 13 points from their opening five matches. PSG, under new coach Laurent Blanc, are two points behind in third.

Another pivotal match between two teams expected to challenge for honours takes place in the Eredivisie this weekend.

Reigning champions Ajax travel to PSV Eindhoven on Sunday, without any travelling support after their fans were banned from attending the game.

Unbeaten PSV are second on 12 points, one adrift of surprise leaders PEC Zwolle.