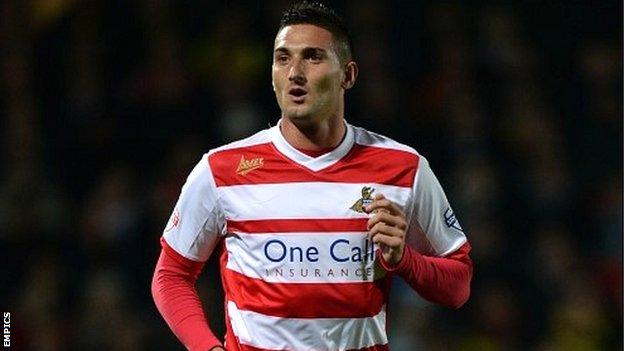 Federico Macheda's third goal in two games gave Doncaster victory at winless Sheffield Wednesday, who slipped into the bottom three in the Championship.

The on-loan Manchester United striker was unmarked to head in a cross from James Coppinger in the 71st minute to give Rovers a first win in seven games.

Wednesday spurned chances after having much of the play, and Jermaine Johnson saw a header cleared off the line.

Doncaster failed to register a shot on goal during the opening 45 minutes but their victory took them up to 17th in the table.

Rovers captain Rob Jones made a mess of Michail Antonio's cross from the right and the resultant loose ball fell to Atdhe Nuhiu eight yards out, only for the towering striker to divert his strike wide.

Antonio broke on the counter-attack when a Doncaster corner was cleared but his pass bounced too high for Johnson and the Jamaican's acrobatic attempt was comfortably stopped by visiting goalkeeper Ross Turnbull.

Wednesday continued to have the better opportunities and Miguel Llera's back-post header from Stephen McPhail's cross was smartly turned behind by Turnbull.

At the other end Macheda created space for himself in the penalty area but his shot from an acute angle was kept out by Chris Kirkland.

However, the 22-year-old Italian soon poached the only goal of the game, substitute Coppinger allowed time and space on the left to curl a right-footed cross to the far post for Macheda to power home past the helpless Kirkland.

After Wellens saw his late effort saved and the loose ball was scrambled clear, Wednesday sent Kirkland up for a late corner and Rovers substitute Mark Duffy saw a speculative effort from the halfway line drift wide of the post.

"We dominated it - sometimes a little lack of quality in good areas - but we've had some good chances.

"They've cleared a couple off the line, the keeper's made a great save from Miguel Llera and it's frustrating.

"It's hard for everybody at the moment because if you play poorly and lose you've got to accept it."

"At half-time we changed the system around and in the second half we were a lot better.

"We kept the ball better and we were a threat on the break as well.

"I'm delighted with the three points more than anything else because we've been playing well recently and not getting the points we deserved, so we're really happy to pick up three away from home."