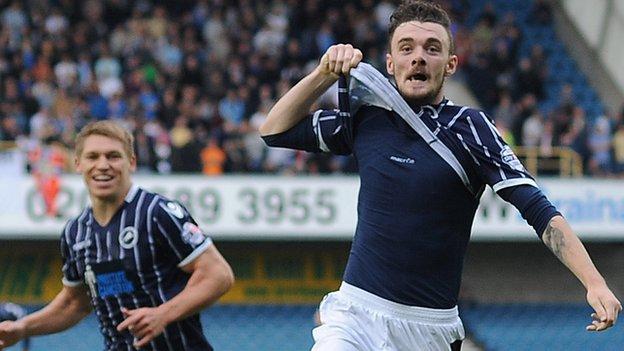 Millwall's surge up the Championship table continued as they scored two second-half goals to beat Leeds and earn a third straight league win.

After a slow opening both sides had chances, Leeds's Alex Mowatt denied by keeper David Forde, before Martyn Waghorn hit the post for the hosts.

Millwall seized the initiative in the second half, Martyn Woolford slotting home from the edge of the area.

Scott Malone's low finish sealed the win after he linked with Liam Trotter.

Millwall failed to earn maximum points from any of their opening six league games this season as Steve Lomas endured a torrid start to his managerial reign at The Den.

But his team's fortunes appear to be changing with this victory, which lifts them up to 16th, coming after wins against Charlton and Blackpool.

Leeds, meanwhile, are heading in the other direction, a third straight Championship defeat sending them sliding down to 15th in the table.

Before the hosts eventually took control, Leeds ought to have gone ahead through Ross McCormack, but he failed to connect with a left-wing Mowatt cross.

They were punished midway through the second half, Woolford's smart finish giving Leeds keeper Paddy Kenny no chance.

Leeds brought on Sam Byram and Matt Smith as they searched for an equaliser, but the game was all but over when Malone exchanged passes with Trotter before producing a measured finish.

Waghorn forced a fine save from Kenny soon after, then Woolford missed the rebound as the Lions came close to adding a third.

And in the dying minutes, Woolford's chip over Kenny struck the post as Leeds were spared any further punishment.

"The second half went wrong. We didn't turn up, we didn't do the ugly stuff well enough. It's the first time that's happened with me.

"The second half came as a shock. I'm bitterly disappointed with the players we've got who are decent but are not at the level at this moment.

"If you let runners go at your goal or get the wrong side of players, then that's what happens.

"We need to turn this round as quickly as we possibly can and I have faith in the players they can do it.

"If the fans see another second-half performance like we did then we're going to have a problem. We need to keep the fans with us."

"The two goals we scored were worthy of wining any game.

"They were two good pass-and-moves and they underrate themselves sometimes. They are good players and I believe in them.

"Those two goals were as good a pair of pass-and-move goals as you're likely to see in the Championship this season.

"Scott Malone's goal was great and he nearly got another one. He's a young man but you see he has got the natural attributes to be a very good player."