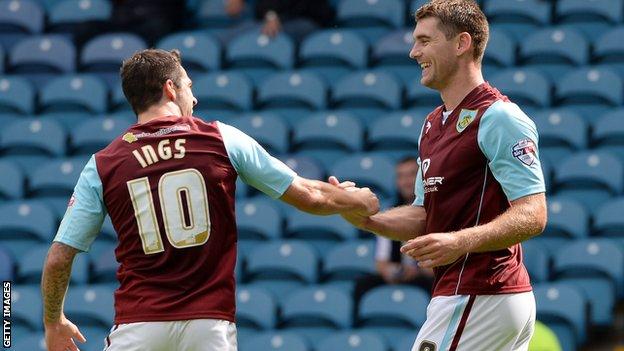 All but two of Burnley's 20 points collected this season have been gained from matches in which they've scored two or more goals.

The former Wolves striker then completed the victory with four minutes remaining when he volleyed home Junior Stanislas's corner.

Burnley have been a surprise package this season and have yet to suffer defeat at Turf Moor while Chris Powell's Charlton have only picked up one league win.

The Addicks set up in a defensive formation aimed at stifling the Burnley attack and it was the visitors who had the first chance when Simon Church tested Tom Heaton.

Vokes went closest for the Clarets, glancing a Kieran Trippier cross just wide of the far post, before striker Ings got his 10th of the season when he turned in another Trippier cross seven minutes before half-time.

Callum Harriott fired over for Charlton three minutes into the second half before Vokes added the second after a sweeping move from the hosts in the 66th minute.

Church almost got his side back into the game a minute after the second goal but he headed wide.

After Ings almost added a third 10 minutes from time with a stooping header that hit the woodwork, Vokes sealed the win in the 86th minute.

"Sam Vokes has been very good for us. I had a chat with him in the summer and he's certainly grasping the nettle.

"The front line always get the headlines but they are getting great support from the group. We're defending well and Tom Heaton isn't having masses to do.

"We made it clear we wanted to build the team ethic and the open-mindedness of being in it together. There is respect and honesty in the group and that is an invaluable quality."

"We're at the different end of the spectrum to Burnley at the minute. They're playing with confidence and they hurt us with that result. We're in a tough situation at present but we'll have to find a way through it.

"All we can do is prepare for the next game. We can't change any event that has happened.

"We've looked at a few different ways of playing but the players, myself and my staff have to turn it around."