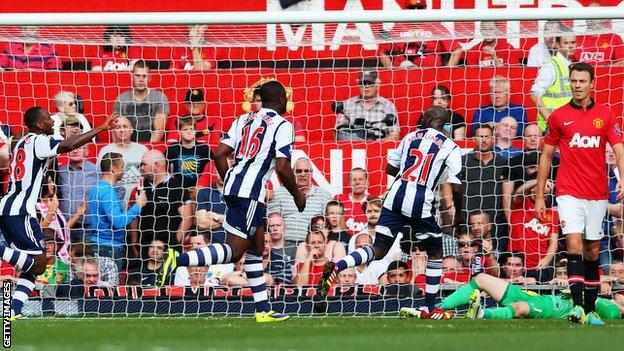 Berahino then got his first Premier League goal, with Marouane Fellaini's late effort ruled out for offside.

The defeat for United ensured their worst start to a league campaign after six games since 1989-90.

Less than a week on from their 4-1 hammering at the hands of Manchester City, United were desperate for three points and West Brom appeared to offer the perfect fixture, with the Baggies without a win over United since 1984 and none at Old Trafford since December 1978.

But they were to be outdone by Steve Clarke's side, who ensured United remain on seven points after six games, the same tally they had collected 24 years ago in the old Division One.

The hosts created a few early chances despite a laboured start, with West Brom goalkeeper Boaz Myhill making a comfortable save from a Rooney header.

Manchester United have become only the second top-flight English champions, after Blackburn in 1995-96, to begin the following season with three (or more) defeats in their opening six matches since Leeds did so in the 1974-75 season.

The Baggies should have taken the lead on the half-hour mark when Stephane Sessegnon headed wide after being found by midfielder Amalfitano, who is on loan from Marseille.

United boss David Moyes will have been frustrated with his side's hesitant approach in the final third and, when they did breach the West Brom defence, the hosts were wasteful as Rooney headed over from Nani's cross.

Berahino, who replaced the injured Scott Sinclair early in the first half, blasted over just before the break from close range with a number of red shirts on the line as Clarke's side matched their more favoured hosts.

The Baggies continued to push forward after the break and Sessegnon slid a cute ball to Berahino, but the England Under-21 international's low shot was saved by De Gea with his feet.

However, the opener came through the magic of Amalfitano, who ran through the United defence before he sent De Gea to ground with a clever faked shot then lifted the ball stylishly over the Spaniard.

United were still struggling to create chances but got some fortune when Rooney's free-kick found its way to the net after it was missed by all the red shirts in the area and caught Myhill out.

The goals sparked the game into life, Jonas Olsson hitting the bar when he headed into the ground and the ball spun over De Gea, who then pulled off a superb finger-tip save to stop Amalfitano's shot finding the top corner.

However, De Gea could do nothing to stop Berahino from putting West Brom back into the lead as the striker's low strike nestled into the bottom corner soon after.

United pushed for an equaliser in the final stages but Fellaini was adjudged to be offside from Nani's cross before fellow substitute Adnan Januzaj blasted wide.