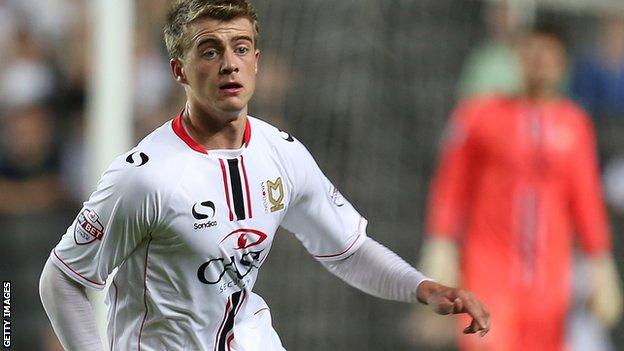 Patrick Bamford's brace helped MK Dons to a convincing win over Stevenage and into the top six in League One.

Bamford opened the scoring with a glancing header from Shaun Williams' free-kick and added his second by slotting home Luke Chadwick's cut back.

Dele Alli poked home a third for the hosts before Darren Potter turned a Luke Freeman cross past his own goalkeeper to give Boro hope.

Stevenage have now conceded 10 goals in their last three games and this defeat leaves them languishing in 20th place, while MK Dons move up to sixth.

"I know my players, I know this club, and in signs of adversity we always come back fighting.

"I thought the way we moved the ball around in the first half was sensational.

"Danny Green was sensational today. It's his best performance in an MK Dons shirt for me. And Deli Alli is one of the best English players in the country - fact."

"You can see youth and you can see inexperience. When they make mistakes, sometimes that's part of the learning process.

"In the latter stages of the game we had always banked on the fact that they would tire and we'd come strong and sure enough as the game went on, Chadwick and Potter went off, that experience went out of their side and I think we became by far the more threatening side.

"On a different day we could even have gone on to get a leveller. There were a lot of positives for me today after the earlier catastrophies and that is what we'll go away and work with."