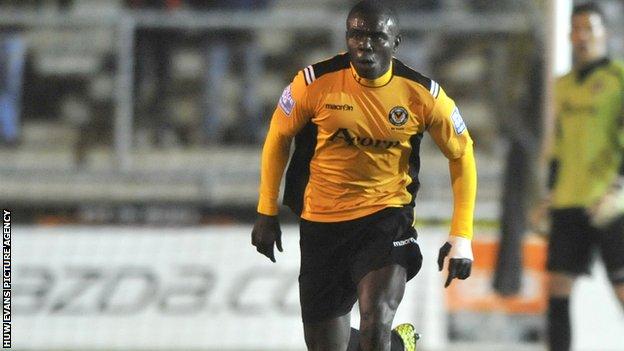 Newport County recorded their fifth win of the season in League Two by overcoming Torquay at Rodney Parade.

The Exiles took control of proceedings early on and were never really troubled by their visitors and were 2-0 ahead at half-time after goals by Ismail Yakubu and Danny Crow.

Torquay debutant Adebayo Azeez clawed his side back into the game with an effort midway through the second half.

Newport slip a place to eighth in League Two despite the win.

Yakabu's free-kick opened the scoring on the 28th minute before a right-foot finish by Crow from a Conor Washington cross doubled the home side's lead.

Azeez, who signed on loan from Charlton on Thursday, produced a superb right-foot finish for his goal on the 58th minute.

While Andy Sandell and Bryan Anthony are both on the long-term injury list for the Exiles.

Torquay were without goalkeeper Michael Poke who continues to undergo shockwave treatment on his torn thigh muscle.

"We have had a couple of disappointing results rather then performances at home, and we were a little bit edgy towards the end.

"It was about getting the home victory and the crowd played their part again and we are pleased to get over the line.

"We are really being punished at the moment, Ryan Bird has picked up a dead leg in a University game on Tuesday.

"It was an innocuous challenge but he could not make the bench.

"But the players who played have done a fantastic job."