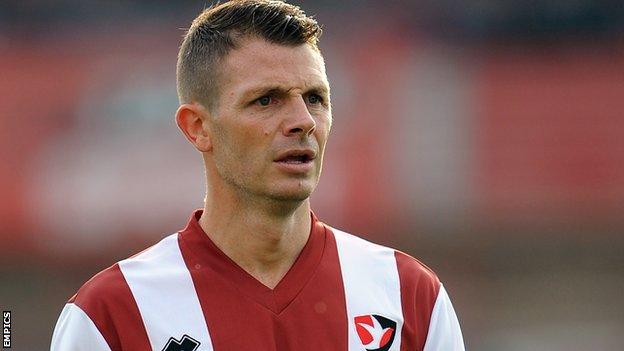 Cureton netted after latching on to a huge clearance by keeper Scott Brown.

Wimbledon waited until the second half for their best chance - a free-kick awarded when Brown handled a back-pass.

The visitors were reprieved when the referee awarded Cheltenham a late penalty then changed his mind, but Cureton's goal quickly followed.

The spot-kick had been awarded when Terry Gornell was fouled, but referee Darren Drysdale then changed his mind and gave Wimbledon a free-kick.

"We got what deserved in the end. We kept going and showed resilience.

"I'm a relieved man, no doubt about it, because I thought our performance deserved a win today, but I think the referee is also a relieved man as well.

"Jamie Cureton has shown that we've got some good players. It's a lesson for all the young strikers at the club, he had the composure to put in a great finish.

"We need performances like that, and we need to improve on loads but I don't think the players need to hear that today."

"I thought for 20-25 minutes in the first half we were really good.

"We passed the ball well, we moved it well, and you could see one team brimming with confidence and one team that had had a few defeats lately. We had our chances to maybe get our noses in front, we didn't.

"Second half, you were always going to get that little bit of pressure on you. They're the home team, you knew you weren't going to dominate the game away from home, and they came at us.

"After 91 minutes, 59 seconds - I was ready to say my back four were outstanding - alongside my goalkeeper. I can't really change that opinion just because of one slip-up. We're all gutted.

"The players have all had a bit of a moan-up at each other in there, and I said, it's a good away performance for the majority of the game and it was a tough place to come and unfortunately we've come away with nothing."