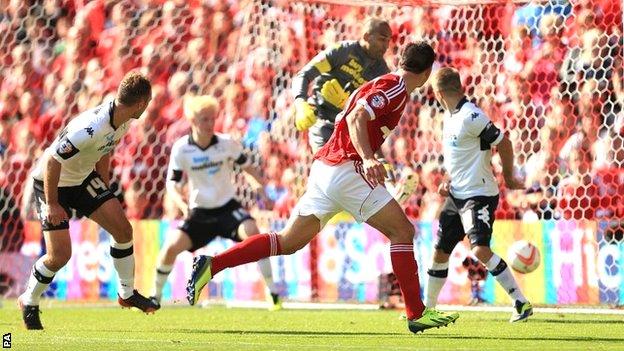 Hobbs timed his run to perfection to meet Andy Reid's corner emphatically on the edge of the six-yard box.

After the break, Derby's Richard Keogh was shown a second yellow card when adjudged to have felled Chris Cohen.

In addition to the customary hostility of an East Midlands derby, the 93rd competitive meeting pitted two sides with unsurpassed records this season.

Forest had won three of their first four home games and Derby boasted the same return from their travels.

A crowd of 28,276 created a suitably passionate atmosphere and Forest had the better of the early exchanges, Radoslaw Majewski turning adroitly and firing a low left-footed shot that was tipped around the post by visiting goalkeeper Lee Grant.

Although Derby were largely restricted to long-range first-half efforts, the closest of which was a Craig Byson effort swerving narrowly wide, their greater percentage of possession nullified Forest for large periods.

But after Eric Lichaj's shot deflected fractionally over the bar for Forest, a superbly directed resulting corner from Reid was powerfully nodded home by Hobbs, who had begun his run from the edge of the penalty area.

Jamie Mackie, head bandaged after a clash of heads with Jake Buxton, might have doubled the advantage but his close-range effort was smartly blocked by Grant.

Defences remained on top after the break but Henderson squandered a clear chance created by the cultured left foot of Reid, mistiming a header and failing to hit the target when unmarked six yards from goal.

Derby, who won the corresponding fixture 1-0 last season, created little, Chris Martin slicing over from inside a crowded penalty area and Will Hughes seeing a free-kick from the edge of the area comfortably held by Forest keeper Karl Darlow.

Forest should have made sure of victory after the controversial penalty decision, Keogh convinced he had won the ball when sliding in to check Cohen's run, but Grant dived low to his right to make an agile save.

Substitute Sammon had the best chance for the visitors, his low strike well smothered by Darlow, while the influential Reid went close on the break as Forest regained the Brian Clough Trophy, the prize awarded to the winner of the derby in recognition of the legendary former manager of both clubs.