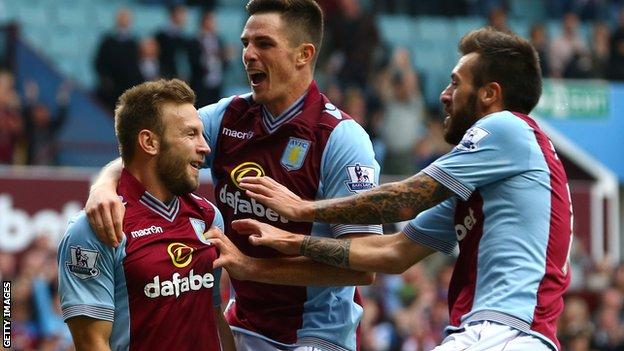 Manchester City missed the chance to go top of the Premier League as they suffered a shock defeat at Aston Villa.

Yaya Toure volleyed in the opener to give City hope of recording a first away win of the season.

Karim El Ahmadi's close-range finish levelled matters, only for Edin Dzeko to head City back into the lead.

But Villa equalised through Leandro Bacuna's free-kick before snatching the three points when Andreas Weimann raced through and poked home late on.

Until those two late goals, City - bidding for a second Premier League title in three seasons - were on course to go top of the table, albeit only for a few hours with Arsenal beating Swansea 2-1 in the late kick off to remain in first place.

The win for Villa, meanwhile, was their first at home this season and the second-half performance will have given home fans plenty to be happy about, particularly the display of Dutch midfielder Bacuna.

The summer signing from FC Groningen provided the assist for Villa's first, while his equalising free-kick - his first Premier League goal - would have been difficult for any goalkeeper to keep out.

City arrived at Villa Park looking to maintain the momentum built up from their impressive 4-1 victory over Manchester United last weekend, a third successive home win in the Premier League.

But, for all their dominance at Etihad Stadium this season, they have been disappointing on the road.

Manuel Pellegrini's side have only taken one point from their first three Premier League away fixtures this season. City have won only three of their last 11 away fixtures.

Manuel Pellegrini's side had taken just one point from a possible six prior to travelling to Villa, but a first away win looked promising for the visitors as they dominated early on.

The home side's 3-5-2 formation was leaving them defensively fragile on the flanks and City repeatedly found spaces, with James Milner shooting wide while Samir Nasri's deflected shot flew just wide of the upright.

City keeper Joe Hart had little to do in a first half Villa rarely managed to threaten in. The closest they came to scoring was a 25-yard free-kick by El Ahmadi which sailed over the bar.

Ciaran Clark kept Villa in the game with a goal-line clearance from Toure's effort as half-time approached, but the midfielder was not to be denied his sixth goal of the season soon after.

A corner was whipped in by Nasri and, although the ball was headed away from goal, it went only as far as Toure, who hit a first-time volley underneath the dive of Guzan.

It was a lead the visitors fully deserved, but Villa were level just five minutes into the second half. Bacuna, 22, slipped a smart ball to send El Ahmadi clear and, despite the Morocco international appearing offside, the flag stayed down as he fired past Hart.

Villa's delight was short-lived as City regained the lead minutes later, Dzeko powering a header past Guzan from Nasri's corner.

Facing the prospect of a third successive home defeat, and having twice gone behind, Villa could easily have given in to City, but instead they grew into the game.

Captain Ron Vlaar volleyed into the hands of Hart from Vincent Kompany's poor clearance before the hosts were presented an even better chance to equalise when they were awarded a 73rd-minute free-kick 25 yards out.They took full advantage as Bacuna confidently stepped up to curl a sublime effort that gave Hart no chance.

Three minutes later, and with City still regrouping from that equaliser, Villa were gifted a decisive third goal.

Kompany and Matija Nastasic allowed Guzan's delivery to bounce and Weimann took full advantage, racing towards goal before poking the ball beyond the onrushing Hart to seal a dramatic victory which lifts Paul Lambert's side to ninth in the Premier League.

"People coming here probably would have thought Manchester City would have won comfortably but our performance was fantastic.

"I am absolutely proud of the players. We seem to be doing it the hard way, winning away and finding it difficult at home, but we were fantastic.

"We are doing pretty fine at the minute. I don't put any pressure on the lads - just try and let them enjoy their football and try and win as many games as they can."