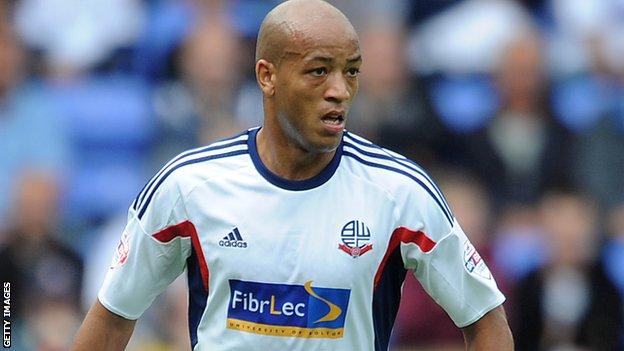 Bolton avoided a sixth defeat of the season as Alex Baptiste's late goal rescued a point against Yeovil.

But Bolton defender Matt Mills smashed a header against the crossbar and Baptiste was on hand to nod in the equaliser.

The Trotters are still without a win this season, but the point was enough to move them off the bottom.

Bolton were one of the favourites for promotion after they narrowly missed out on a play-off spot last season, but they have had a disappointing start to the campaign.

Bolton have mustered four points from a possible 27, and have not won in 11 league outings, since a 2-1 home victory over Middlesbrough on 20 April.

In an effort to inspire a turnaround in his side's fortunes, Bolton manager Dougie Freedman made three loan signings in the days before the game - Liam Feeney and Neil Danns from Millwall and Leicester respectively, plus Cardiff's Kevin McNaughton.

None of the three started, however, with Feeney and Danns on the bench and McNaughton left out of the squad completely.

Nevertheless, Bolton had the better chances in a relatively flat first half as Medo Kamara rattled the post before Lee Chung-yong forced Yeovil keeper Wayne Hennessey to save with his chest.

Bolton increased the intensity after the break and substitute striker Jermaine Beckford twice went through on goal. His first effort was denied by Hennessey before he shot wide on the second occasion.

A first win of the season seemed increasingly likely for Bolton until poor goalkeeping gifted their fellow strugglers Yeovil the opener.

Upson tried his luck with a shot from distance that dribbled towards Adam Bogdan, but the Bolton keeper somehow let the ball slip through his legs and over the line.

However, Bogdan was left relieved just before full time when Baptiste headed in the equaliser, before Zat Knight almost stole all three points for the hosts with a header in the last seconds of the game.

"I understand the fans' frustration. They pay good money and they want short-term results and that's completely fine.

"I've been in this position before and I will fix this. I understand exactly what we have to do and I understand this division.

"Adam Bogdan's got to dust himself down and get in training tomorrow with his chest up and chin up and ready to go against Blackpool.

"He's got all the right attributes to be top class. His concentration has just let him down a bit today."

"It's like a broken record, every week we seem to get something where somebody makes a poor decision.

"The lads are pretty adamant the cross was out of play, which is why a few people stopped because they thought it was a yard out.

"We've got to be careful that you don't get too carried away with being disappointed with a point at Bolton.

"We're disappointed because we were 1-0 up, albeit a mistake from the keeper."