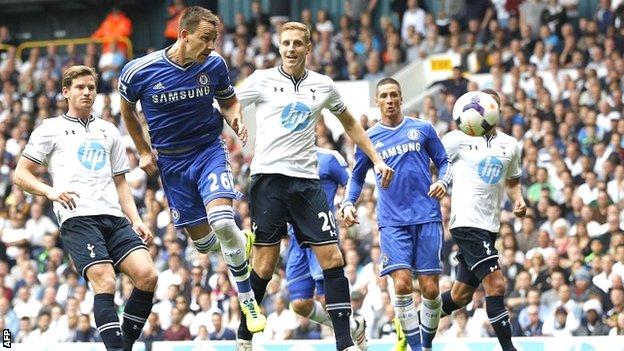 Gylfi Sigurdsson ensured Tottenham had the first-half lead their dominance deserved but Chelsea were revitalised by the introduction of Juan Mata at half-time and Terry's equaliser came as he headed home the Spaniard's free-kick after 65 minutes.

Chelsea striker Fernando Torres was unluckily sent off with nine minutes left after receiving a second yellow card from referee Mike Dean following an aerial challenge with Spurs defender Jan Vertonghen - the conclusion of a lengthy battle between the pair, especially in the second half.

Spurs boss Villas-Boas and Mourinho were once close confidantes as they worked together at Porto, Chelsea and Inter Milan but the current frosty nature of a relationship that has broken down was reflected in their lukewarm pre-match handshake.

And both had to settle for a point from this meeting, meaning Spurs and Chelsea finish the day second and third in the table respectively, losing ground on leaders Arsenal, who won at Swansea, but enjoying a more profitable afternoon than Manchester City and Manchester United, who both lost.

Mourinho gave Torres the main attacking role with Samuel Eto'o on the bench - where he was joined by Mata.

Chelsea's £30m signing Willian, snatched away from Spurs as he was on the brink of completing a move to White Hart Lane, was not even on the bench as he continues to be on the margins of Mourinho's team.

And it was the player Villas-Boas turned to after the loss of Willian, Christian Eriksen, who was the main creative force in a first half in which Spurs took control.

Chelsea's return of 11 points from six matches this season mirrors their start to their 2007-08 campaign. On that occasion, Jose Mourinho was sacked as manager

The £11.5m signing from Ajax easily escaped Frank Lampard after 19 minutes and played in Roberto Soldado. Sigurdsson was quicker to Soldado's lay-off than Terry to slide his finish past Chelsea keeper Petr Cech.

It brought a fist-pumping celebration from Villas-Boas - but he was left frustrated when Spurs wasted the opportunity to double their lead just before half-time when Paulinho struck the outside of the post from Andros Townsend's pass.

Mourinho was off down the tunnel even before referee Mike Dean blew the half-time whistle and he acted during the interval, replacing John Mikel Obi with Mata.

Torres was at the centre of events soon after the break, first crossing for Oscar who just failed to make contact at the far post.

The Spaniard was then shown a yellow card - and was lucky to escape a red - when he tripped Vertonghen before grabbing his face, and he rounded off a lively few minutes as Spurs keeper Hugo Lloris was forced into a save at the striker's feet.

Vertonghen himself was booked for a late challenge on Ramires and Chelsea inflicted further punishment when the unmarked Terry timed his run perfectly to glance home Mata's free-kick.

The momentum had moved towards Chelsea and Villas-Boas removed Eriksen and Townsend for Nacer Chadli and Lewis Holtby in an attempt to restore the order and control Spurs had before the break.

And he made his final change with 14 minutes left when he introduced Jermain Defoe for Soldado.

The confrontation between Torres and Vertonghen had been threatening to boil over and the striker was sent off after both players went down after a challenge in the air. It was innocuous with no malice and it was a disbelieving Torres who walked slowly off towards the tunnel, where he was consoled by Mourinho.

Spurs attempted to cash in on their numerical advantage as Cech saved low from Defoe and Vertonghen shot just wide. It was the final opportunity of a frenetic finish.