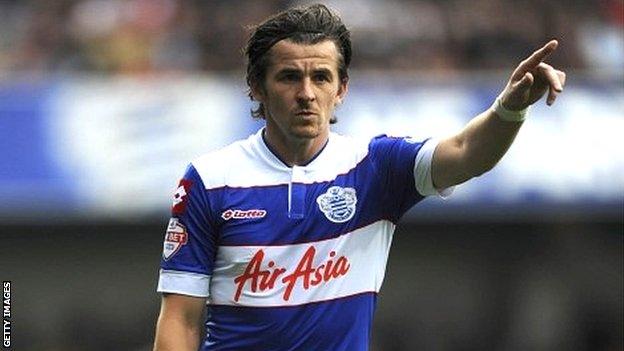 QPR remain unbeaten in the Championship after securing a club-record equalling seventh consecutive clean sheet with a home victory over Middlesbrough.

Rangers opened the scoring when Danny Simpson's cross fell to Joey Barton and he fired home from the edge of the box.

They doubled their lead when Charlie Austin scored from the spot after Ben Gibson handled a Gary O'Neil shot.

Both sides had chances in the second half but QPR won comfortably to remain three points clear at the top.

Rangers on the march

QPR have now won eight of their 11 matches in all competitions this season, with their only defeat coming at home to Swindon in the Capital One Cup

Rangers boss Harry Redknapp opted for a 4-5-1 system with recent signing Niko Kranjcar drifting in from the left and it caused Boro, who are only four points above the relegation zone, immediate problems.

Barton fired through a crowded penalty area to put his team in front.

The midfielder was then denied by Jason Steele and the Boro keeper also kept out Austin's shot, but the loose ball dropped to O'Neil and his follow-up hit Gibson's hand.

Austin dispatched his second penalty in as many matches and struggling Boro - now without a win in seven matches - never looked like recovering.

They did rally early in the second half and substitute Lukas Jutkiewicz's shot brought a save from QPR keeper Rob Green, while Albert Adomah narrowly failed to connect with Jutkiewicz's right-wing cross.

Adomah later poked wide from 10 yards out but otherwise it was all Rangers and O'Neil had two efforts saved before curling a shot wide.

"We got the ball down and played, controlled the game and kept possession. It was our best display of the season by a mile.

"We've been getting the results but we perhaps haven't been as convincing as we'd have liked with our performances.

"Joey Barton was excellent, Niko Kranjcar came into the side and is a real footballer - but there were others and they were all very good.

"Fortunately, we've managed to get off to a good start. The feeling around the club is a million miles from what it was."

"I thought Ben Gibson gave one of our best performances. For a young boy he's got a voice and an understanding of defending.

"To go out and be a goal down after three or four minutes, especially against a team who haven't been conceding goals, left us with a tough task.

"I'm sure that gave QPR a lot of belief and to give them such an early start was frustrating.

"We have to strive to be better and improve. We came here full of expectation that we could get something, but we didn't and we didn't deserve to."