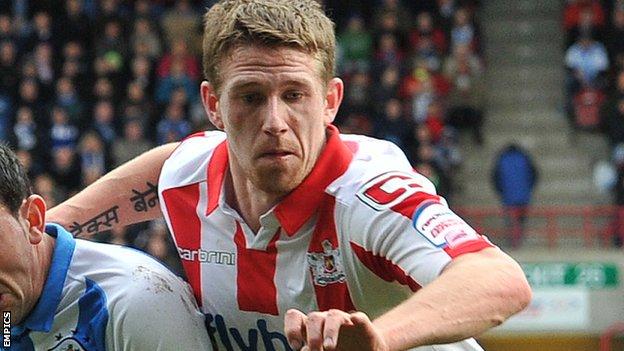 Scot Bennett scored a brace as Exeter City came from behind to beat Fleetwood Town at Highbury.

Fleetwood dominated the first half but had to wait until 71 minutes to take the lead through Matty Blair's strike.

Exeter came back into the game in the second half and got the equaliser five minutes later when Bennett rifled the ball home.

Centre-back Bennett got his second with a neat volley after 79 minutes to earn the Grecians all three points.

The Cod Army failed to close the gap on leaders Chesterfield, who lost to Mansfield.

Fleetwood announced the signing of Colwyn Bay goalkeeper Josh Ollerenshaw before the match.

The 22-year-old, who came through Oldham's youth system, has agreed a deal until the end of the season.

"It was a frustrating afternoon. Exeter played in a way to frustrate us and they did that. We still played some good football, but perhaps not quickly enough.

"You could feel a bit of frustration around the place but that's part of the expectation levels being lifted with our recent form.

"We deservedly went in front but then took a backward step. We went backwards in our mentality and tried to protect a 1-0 lead, instead of playing the same way and creating more opportunities."