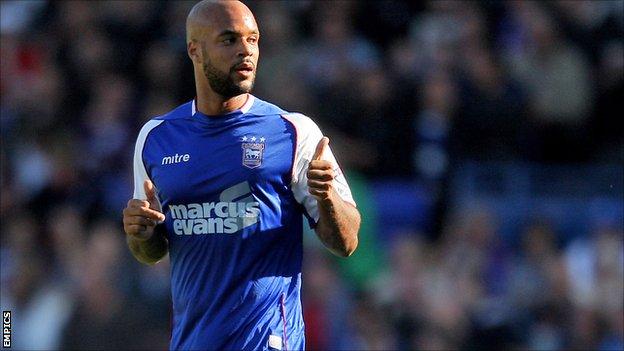 Ipswich climbed to ninth in the Championship as two goals from David McGoldrick saw off Brighton.

McGoldrick opened the scoring with a shot that took a deflection off former Ipswich loanee Keith Andrews.

His second was a clinical finish as he rifled a shot into the far corner after cutting inside Gordon Greer.

The best the visitors could muster was an Ashley Barnes shot from the edge of the area that never looked like troubling Dean Gerken's goal.

Andrew Crofts poked wide an early chance for Brighton who were made to pay for their poor finishing when Ipswich took the lead out of the blue.

Not for the first time this season, McGoldrick let fly from distance and the ball nestled in the top corner after taking a deflection off Andrews.

McGoldrick doubled his team's advantage just four minutes later after Gerken's long clearance was flicked on by Daryl Murphy and the former Nottingham Forest man found himself one-on-one with Greer.

The in-form marksman shaped to shoot, before cutting past the Seagulls skipper and rifling a shot into the far corner with his left foot.

The Town number nine laid it off neatly to McGoldrick but he could only poke his shot over the bar under pressure.

Brighton offered little and Murphy was unable to direct Aaron Cresswell's corner on target after a fluid period of passing that got the home fans on their feet.

The visitors finally mustered a decent opening in the 64th minute when Christophe Berra initially made a hash of dealing with Kazenga LuaLua's low cross, before getting in a superb block to deny Crofts.

Kazenga LuaLua, dropped in favour of Craig Conway, was trying to make an impact and he fizzed a shot wide to remind the buoyant home fans that there was still time for Brighton to rescue something.

And they were denied what looked like a great shout for a penalty in the 73rd minute when Tommy Smith blocked Will Buckley's shot with his arm.

"We had to work very hard to beat a good side. You don't get anything easy from Brighton - they have some good players and actually started better than us.

"That's this league. We took our chances when they came along with a very good performance from McGoldrick. He was excellent.

"You have to play well to beat a good side. Throughout the team, we had good performances."

"We knew McGoldrick could be a threat and today he showed that he is a player who can play at a higher level.

"He was the difference between the two sides.

"We were not good in the first 25 minutes, but after that we improved."