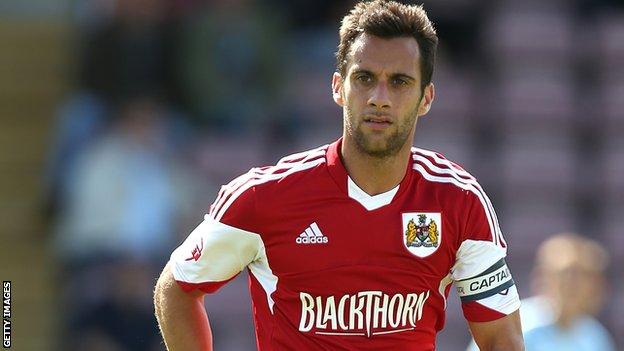 Matthew Taylor gave the U's a first-half lead against the run of play when he headed in Luke Garbutt's cross from the left.

Baldock then equalised with a smart finish from eight yards.

The City captain headed wide as the hosts pressed for a late winner, but the visitors held on and the Robins are still without a victory in League One.

Colchester may even have stole it themselves when Jabo Ibehre went through on goal, but defender Derrick Williams produced a brilliant last-ditch tackle.

The result leaves City 19th in the table, while the U's are 13th but are without a win in six.

"That's the gamble everybody wants to win and you leave the backdoor open.

"We had one mistake in the second half by letting them through, thankfully we were covered. We could have been shooting ourselves in the foot coming off with a different reflection of the game.

"They've got something to hang onto. They came out and let us play so we have really got to work the ball and I think we did that exceptionally well."

"I think we should be pleased with our performance again, we were missing 10 players coming into the game today.

"We blooded another youngster and our youngsters that were out there anyway played well.

"We knew they would have a lot of possession and we let them have possession in a certain area of the pitch. On the counter-attack we were very dangerous. I thought our tactics were spot-on.

"I'm a little bit disappointed we've drawn because we had a couple of great opportunities at the end to win it. That shows the progression that we are making."