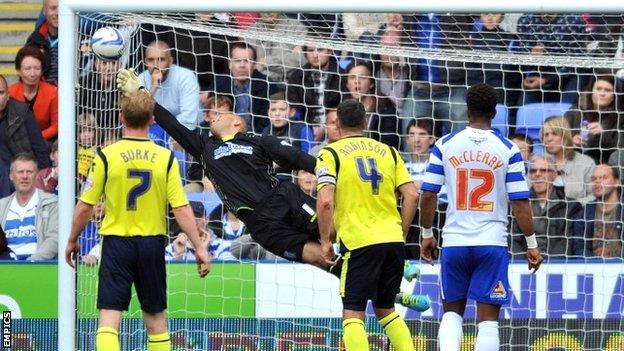 Danny Guthrie scored a free-kick in each half as Reading moved into the play-off places with victory over Birmingham at the Madejski Stadium.

The opening set piece from wide on the left somehow found its way through a mass of bodies into the far corner.

Birmingham created little but Chris Burke shot over from a David Murphy cross and at the other end a deflected Garath McCleary shot was well saved.

Guthrie made sure of victory with a curled strike from the edge of the box.

Reading have now taken 13 points from their last five matches and after weathering some early pressure from the visitors - who beat Swansea 3-1 in the League Cup in midweek - the Royals were full value for the win.

McCleary released Pavel Pogrebnyak inside the Birmingham area but the Russian's fierce shot was well saved by Blues goalkeeper Darren Randolph, and Chris Baird nodded powerfully over from a Guthrie corner as the home side continued to press.

In the second half, Pogrebnyak won an aerial duel with Jonathan Spector and referee James Adcock initially gave Reading the advantage and waved play on, but with three players bearing down on the Birmingham defence, Adcock stopped the game to allow Spector to receive treatment.

More Reading pressure followed as McCleary cut in from the left and drove wide, then forced Randolph to tip over soon afterwards.

The second goal finally arrived when Dan Burn fouled Robson-Kanu on the edge of the area and Guthrie beat Randolph at his near post with the resulting free-kick.

"We could really have been out of sight in the first half with all our chances. We're just starting to build a bit of momentum now with another three points and another clean sheet.

"Every game in this division is so competitive. We've just to make sure we stay in the race until January and then we'll have a look to see where we are.

"There will be no complacency. I'll keep driving them on because we've set our bar very high."

"The difference in the game for me was two top-class set-plays from which we've come undone.

"We could still have taken something from the game if we'd had more composure, made the right decisions and had a bit more of a cutting edge in the final third.

"We made the wrong decisions at the wrong times. In terms of our general performance, I was pleased. We passed the ball around well and competed."