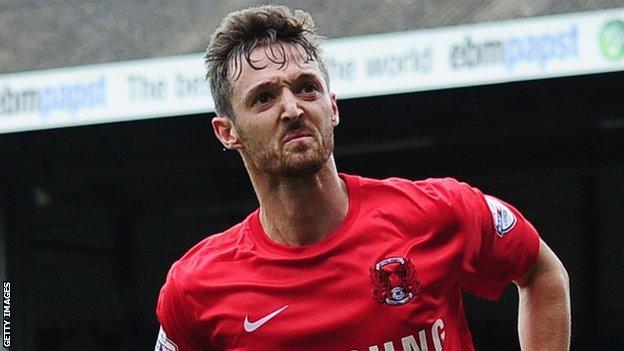 Walsall had skipper Andy Butler red-carded on 17 minutes when his studs caught Orient's Romain Vincelot, then later himself sent off in injury time.

Striker David Mooney fired Orient ahead on 38 minutes after keeper Richard O'Donnell failed to deal with a cross.

But that was cancelled out by unmarked Craig Westcarr's 71st-minute header - the Saddlers' first shot on target.

Vincelot was given his marching orders in injury time for a second bookable offence, as Orient had their lead at the top reduced to three points.

"We can't win them all. But we've come mighty close to making it nine wins in a row, you have to say.

"Their keeper was the best player on the pitch. He's made two terrific saves, we've hit the woodwork and unfortunately they scored. They had one opportunity all afternoon and that's football sometimes. You just have to take that on the chin.

"It just shows the spirit we've got in the camp, having gone down to 10 men.

"The lads never dropped their heads, even when we made a mistake to concede the goal. Richard O'Donnell apologised for the goal but he made some good saves second half and kept us in it.

"We'll be appealing Andy Butler's red card. It never helps when it's right in front of the dug-out and arms can go up and stuff like that, But I don't know what the ref has seen. All I've seen is a fair tackle."