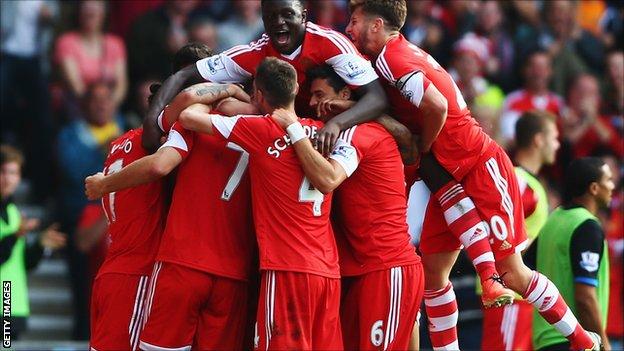 Record signing Dani Osvaldo scored his first goal for Southampton as they beat Crystal Palace to climb to fourth in the Premier League.

Palace striker Marouane Chamakh was booked for diving when clean through while Southampton's Morgan Schneiderlin saw his header cleared off the line.

"A comfortable victory for Southampton who registered their first home win of the season against a Crystal Palace side who have now failed to score in four of their six games."

Osvaldo found the net shortly after the restart with a neat low finish from just inside the box.

Rickie Lambert made it 2-0 shortly after with a fine 25-yard free-kick.

Crystal Palace manager Ian Holloway called on his side to come out fighting like Muhammad Ali ahead of this game, as he returned from a two-match touchline ban.

However, Holloway watched Chamakh waste their best chance by choosing to go to ground when rounding Saints keeper Artur Boruc rather than shoot.

Chamakh was booked for diving with Palace failing to trouble Boruc during a disappointing first half.

Southampton were equally toothless up front with Joel Ward heading Schneiderlin's looping header off the line, while Lambert went close with a side-foot shot from inside the area that flew just wide of the angle.

Keeper Julian Speroni was forced into action moments later as he got down low to punch Lambert's driven free-kick away, but the first-half statistics told their own story: Crystal Palace without a single shot on target; Southampton with just one attempt.

However, Saints broke the deadlock two minutes after the restart and the goal came from £16m summer signing Osvaldo, who showed great strength and quick feet to find the net from just inside the area with a low finish.

It was Southampton's first goal from open play this season and within minutes they doubled their lead in spectacular fashion when Lambert, without a Premier League goal since the opening day of the season, scored with a free-kick which went in off Speroni's right-hand post.

It was the 200th league goal of the England striker's career and he went close soon after as Southampton chased a third while Palace struggled to get out of their own half.

Holloway introduced Cameron Jerome to provide a useful outlet for the Eagles and Dean Moxey saw a late half-volley blocked by the Saints defence.

Southampton brought on Jay Rodriguez for Lambert and he had a goal ruled out for offside after Luke Shaw's initial shot hit the post.

It was the last action of the match, with the Saints comfortable winners against a Palace side who failed to muster a single shot on target and who have not scored in four of their six league games this season.

"I think it is complete happiness for every manager is what happened today, a clean sheet and your two strikers getting on the scoresheet.

"In the second half we were much better than the first half and over the 90 minutes we were the better team.

"We struggled a bit in the first half to understand the set-up of the game but after the break we corrected certain things and that allowed us to play much better in the second half."