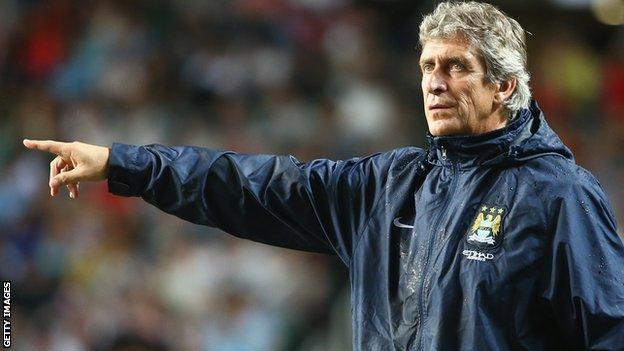 Manchester City manager Manuel Pellegrini believes his players are as mentally strong - if not stronger - than Manchester United's ahead of Sunday's Manchester derby.

Last season City failed to defend the Premier League title they won in 2012, finishing a distant second to United.

"I don't know what happened in the past but I know our mentality at this moment is very strong," insisted Pellegrini.

"[It is] strong or more strong than Manchester United."

The significance of the derby in terms of both local rivalry and the wider context of the title race is not lost on Pellegrini, who is no stranger to big rivalries after previous jobs at Spanish giants Real Madrid and Argentine powers River Plate.

City have not yet faced any of their title rivals this season but the new City boss, who took over in June, is well aware of the importance of victory, even if he knows there are other, equally important, tests ahead.

"Every match in the Premier League is not easy," the 60-year-old said.

"Maybe a derby has a lot of different things but it is not the first important match we have played in the year. I don't need to be here to know how important the derby is, but working here and living here I know it is a special game."

City finished 11 points behind champions United last season and are currently fourth in the Premier League, with just goal difference separating them from United in fifth.

Sunday's clash will be the first Manchester derby since 1986 in which Ferguson will not be in the United dugout and Pellegrini believes that means United boss David Moyes has even more pressure than usual to win the game.

"It is impossible not to be under a lot of pressure, not in replacing Alex Ferguson but in managing Manchester United, or big teams," said Pellegrini.

"You are always under big pressure but that is a good way to work because you know what you have to do."