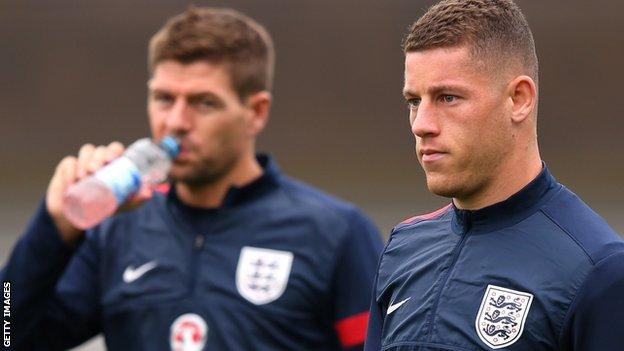 Teenage Everton midfielder Ross Barkley has revealed he was advised to stay at Goodison Park by Liverpool captain Steven Gerrard.

Barkley, 19, was sent on loan to Sheffield Wednesday and Leeds while David Moyes was in charge at Everton, but has now secured a regular starting spot under Roberto Martinez.

"He [Gerrard] said the big hitters are going to be looking at me but the main thing for me is to stay with the club I'm at, the team I support and love," said Barkley.

Liverpool and England captain Gerrard has spent his whole career at the Reds, his boyhood club, making 635 appearances and scoring 159 goals in all competitions.

Barkley, who joined Everton aged 11, is hoping to secure a place in England's World Cup squad having made his debut from the bench against Moldova in the World Cup qualifier at Wembley two weeks ago.

"I was a bit star-struck when I first joined up [with the England squad] but Steven was good to me when I was away. I sat next to him on the coach and he gave me loads of advice," Barkley added.

"He [Gerrard] told me I'm from Liverpool, a local lad playing for the team I support, and there is nothing better. He's done that throughout his career. He said playing is the main thing, going to another team and not playing would be no good for my development."

Everton travel to West Ham on Saturday looking to keep their 11 game unbeaten run against the Hammers intact and Barkley remains confident his side, who currently sit ninth in the Premier League, can help him secure his place on the plane to Brazil.

"I have set my sights on the World Cup," Barkley said. "It's a goal for me. It will be hard, but through hard work hopefully I can get on the flight there," he said.