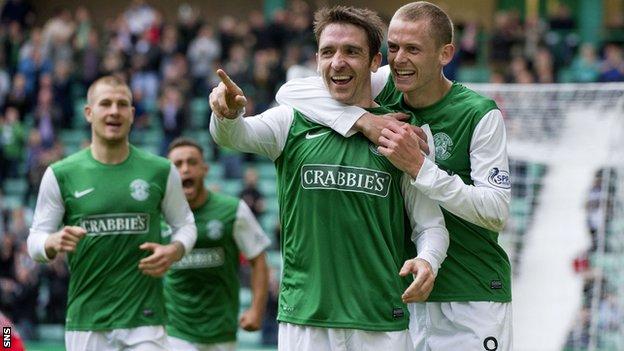 Manager Pat Fenlon was delighted as Hibernian stretched their unbeaten run to five games with a 2-0 win over St Mirren at Easter Road.

"Defensively, we were solid. We didn't give St Mirren too many chances.

"Attacking-wise, we created five or six really good openings in the game. It was a decent performance."

The victory, a first at home this season, lifts the Edinburgh side up to fifth in the Scottish Premiership.

Fenlon was attracting flak from supporters after opening the campaign with a heavy loss to Malmo in the Europa League and picking up just one point from the first three league games.

However, his players have responded well, with Collins and Heffernan on target for the second successive week.

"Confidence helps players, you can see they have a pep in their step at the moment," Fenlon explained.

"We're on a decent run but we've got to continue it.

"The other games we lost, to Motherwell and Hearts, there wasn't a lot in them. The league is a bit like that."

And he was rewarded with a solid defensive display, albeit against out-of-sorts opponents.

"We're not conceding goals, which is a big plus," added Fenlon.

"And now we are starting to make chances, which is pleasing.

"You have to keep working hard and have a belief in what you're doing.

"The players work tremendously hard in training and at the moment we are transferring that training form into game day - that's a big difference.

"And we have players back (from injury), which keeps people on their toes."