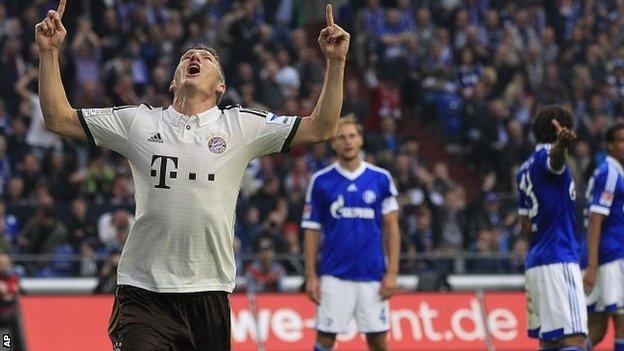 Bayern Munich drew level on points with Borussia Dortmund at the top of the Bundesliga with a 4-0 victory at fellow Champions League side Schalke.

Earlier, Dortmund lost their 100% record with a 1-1 draw at Nuremberg.

Last season's Champions League runners-up, who had won their opening five league games, took the lead just before the break when Marcel Schmelzer powered in a free-kick from 25 yards.

But five minutes after the restart, Nuremberg equalised when a free-kick hit Neven Subotic and dropped into the path of Per Nilsson, who drilled in.

"We wanted to play a little better, but we can live with the point," said Dortmund coach Jurgen Klopp.

Both attacking midfielder Marco Reus and full-back Schmelzer picked up thigh injuries, with Klopp stating that both are doubtful for Tuesday's German Cup second-round clash at second division 1860 Munich.

Bayern were on the back foot during the opening exchanges of their match at the Veltins-Arena before hitting Schalke with two sucker-punches. Schweinsteiger and Mandzukic both scored with headers in the space of a minute.

Ribery side-footed in a third 15 minutes from time and substitute Claudio Pizarro, 34, scored his 167th Bundesliga goal to cap off a great week for the Bavarians following their 3-0 Champions League win over CSKA Moscow.

Bayern and Dortmund both have 16 points from six games and have the same goal difference, with Klopp's team still on top because they have scored more goals.

Elsewhere, Bayer Leverkusen had temporarily taken second spot from Bayern with a 4-1 win at Mainz in one of the four earlier kick-offs, with Robbie Kruse scoring twice for Sami Hyypia's side.

In the north-Germany derby, Hamburg, the only team to have played in the Bundesliga every season since its creation in 1963, lost 2-0 to visitors Werder Bremen.