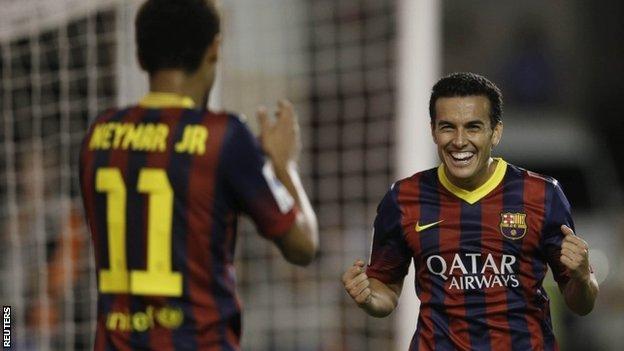 Pedro Rodriguez scored a hat-trick as Barcelona 4-0 at Rayo Vallecano to maintain their 100% start to the La Liga season.

The striker opened the scoring with an angled shot before Victor Valdes kept the visitors in front with a penalty save from Roberto Trashorras.

Barcelona have gone on to win the league on all five previous occasions where they have opened with five successive wins.

The Spain forward tapped in a second two minutes after half-time when he converted Cesc Fabregas's delivery.

He added his third from short range before Fabregas slotted in a fourth.

The win puts Gerardo Martino's side on 15 points after five games, with Atletico Madrid in second also with 15 points, but with an inferior goal difference, followed by Villarreal and Real Madrid on 10 points, who have both played four games.

Lionel Messi and Neymar both had chances for the champions during the first half-hour of the match at the Campo de Vallecas before Pedro found the corner of the Rayo goal following a jinking run from Messi - playing in his 250th La Liga game.

The home side should have been level a few moments later when Adriano fouled Trashorras in the area. The Rayo captain took the penalty, but his effort was saved by Valdes, who also denied Ajax from the spot in midweek.

Barca off the ball?

Barcelona had only 46% of the possession against Rayo Vallecano. The last time Barca had less than 50% possession in a La Liga game was against Getafe in February 2010 - a game they also won.

Pedro scored his and Barcelona's second two minutes after the restart when he smashed his shot high into the net from Fabregas's low ball. And with 20 minutes remaining, the Spain international completed his hat-trick with a tap-in after Brazilian Neymar had squared the ball to him.

Former Arsenal midfielder Fabregas curled in a fourth for Barcelona in the 79th minute.

In Saturday's other matches, Raul Garcia and Diego Costa scored to help Atletico Madrid beat Valladolid 2-0 and keep pace with Barcelona at the top of the table.

Real Sociedad were held to a 0-0 draw by Malaga while 10-man Almeria lost a two-goal lead to draw 2-2 at home to Levante.