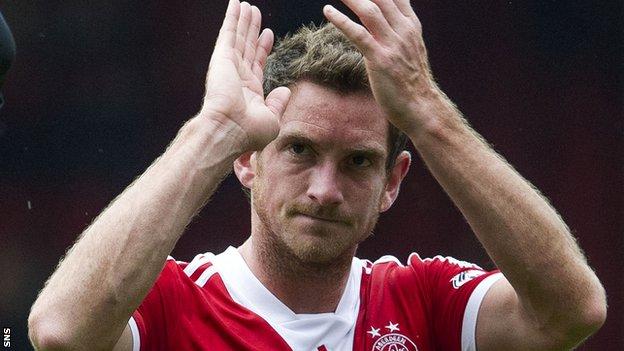 Manager Derek McInnes says everyone at Aberdeen is delighted that it was Scott Vernon who scored their late winner against Inverness.

Vernon's first goal of the season inflicted a first defeat on Inverness.

"It's been well documented he's been searching for that goal," said McInnes.

"He gets his reward for his persistence, perseverance and professionalism. He's such a popular boy amongst the support and his teammates."

English striker Vernon has been on the bench since squandering several chances in an August defeat to Hearts.

Against Caley Thistle, the 29-year-old came on as a 77th-minute substitute for Cammy Smith at Pittodrie. His goal was a wonderful finish; chesting the ball before firing home on the turn to ensure the Dons move to third in the Premiership.

"Strikers need it. It's like their drug - they need it for their confidence and that wee spring in their step.

"It epitomises where we are at the moment - a lot of youngsters on the pitch and Scott Vernon's had to look from the outside in a wee bit."

Terry Butcher's Inverness, who remain top of the Premiership on goal difference, lacked spark and had goalkeeper Dean Brill to thank for keeping out two first-half efforts from Smith and Michael Hector.

The Highlanders' most clear-cut chance was when Josh Meekings had a header cleared off the line by Smith in the second-half.

"In the first half we really dominated the game and created a few chances," McInnes said. "But we've been there before in not scoring when we're on top.

"It was always going to be hard-fought. From the first minute to the last we showed great tenacity.

"We go with two strikers for the last 20 minutes and it's paid dividends. We knew that maybe a bit of quality would win us the game and Scott Vernon gave us that.

"It's nice for the players to get their reward for working so hard and showing so much perseverance."