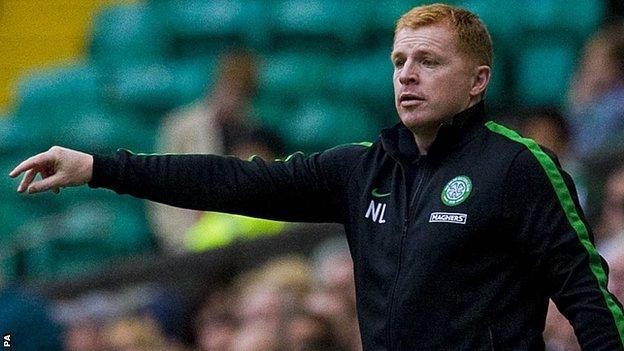 Celtic boss Neil Lennon praised his side after victory against St Johnstone moved them joint top of the Premiership table.

"In the first 45 minutes I think that's as good as we've played this season," Lennon told BBC Scotland.

"It's a fine win because St Johnstone are no pushovers."

Celtic were aiming to bounce back from their midweek defeat in Milan in the Champions League.

Pukki fired them in front, with Mulgrew adding a second as the hosts looked to make their territorial advantage pay dividends.

"On the first-half showing we should've had the game wrapped up," said Lennon.

"On the back of a Champions League game, it was just tiredness at the end.

"We had to throw on Nir [Biton] because of the injury to Adam Matthews. Overall, I'm delighted with three points and this is a big, big win.

"I thought the attitude and the football was great. We put a lot into the first half and there was a lot of energy and you're worried it'll catch up with them and it did."

Celtic missed the pace of Matthews in the second half, according to Lennon, after the Welshman was withdrawn through injury.

"We had to re-jig it a bit with Efe [Ambrose] going over to right back and Nir making his debut," he added. "But some of them are seeing British football for the first time really.

"It's about trying to integrate them as quickly as possible and a few of them will maybe see that there's more to the Scottish game than they thought."

St Johnstone were given hope when Caddis pulled one back against his former club and Saints were unsuccessful with a penalty appeal when Steven MacLean tumbled in the box following a challenge by Anthony Stokes.

"There was nothing in it," said Lennon. "The referee had a good view of it as well; Steven has a tendency to go down quite easily at times."