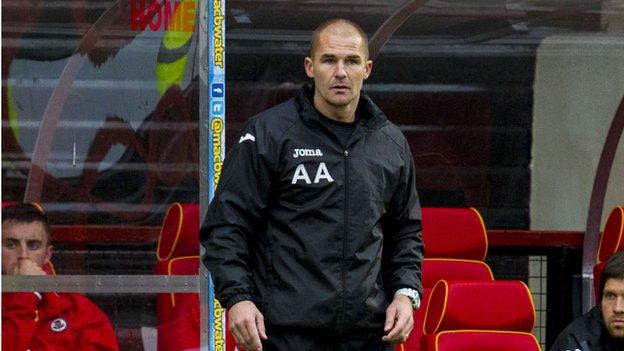 Partick Thistle are still looking for their first Scottish Premiership home win but their manager Alan Archibald sees no reason to panic.

"It's just not falling for us at the moment. Even late in the second half things were bouncing about the box," he said after the 1-1 draw with Kilmarnock made it three home draws and one loss.

"We'll keep plugging away. The win will come at home, we know that.

"I'm happy we didn't lose but I thought we'd done enough to get three points."

Thistle were the superior team for most of the first half at Firhill and were a goal up thanks to Aaron Muirhead's penalty in the 11th minute.

But Kris Boyd beat impressive home keeper Scott Fox with a header at the start of the second half and could have turned the score on its head completely had it not been for the Thistle stopper.

"We never took our chances in the first half but I was glad that they kept on going," Archibald told BBC Scotland.

"I thought they responded very well [to last week's 3-0 home defeat by Aberdeen]. They knocked the ball about in the first half. We dominated the first half an hour.

"The two goalkeepers were very good. Foxy had a great save from Boydy's header after he had scored the first header.

"He has been doing that all season but we shouldn't be relying on Foxy. We'll need to work on that this week to keep them out the box."