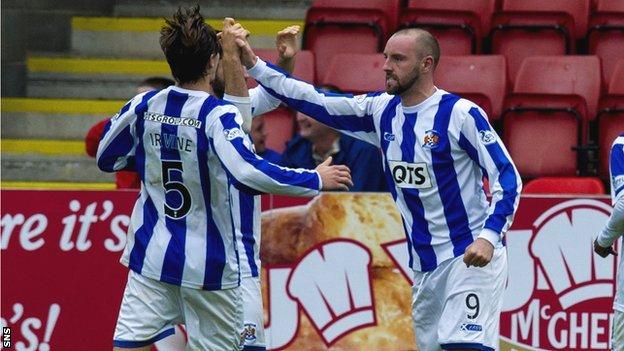 Allan Johnston praised his Kilmarnock players for their comeback in the 1-1 draw against Partick but wants them to give maximum effort for the whole game.

"It was a great effort but we can't let teams get a goal ahead of us," said Johnston, whose team have drawn three and lost four league games to date.

"The first half passed us by. We sat behind the ball without putting any pressure on it and let them pass it.

"In the second half we fixed it and you could see the difference it made."

Kris Boyd rescued a point for Killie with a well directed header two minutes after the restart but it was the home team who impressed for the bulk of the first half.

Thistle had led 1-0 at the interval courtesy of Aaron Muirhead's penalty.

"There was a spell in the second half when it looked like we might go on and win the game, but in the last five to 10 minutes we were hanging on a bit.

"Thistle caused us problems with their movement but we sorted that at half-time, we got the ball down and we passed it better and created chances and Boydy was unlucky not to score another one.

"It must have been good to watch, end-to-end stuff, especially in the second half."

Some travelling fans protested to Kilmarnock chairman Michael Johnston about his stewardship of the club and the Killie boss admitted that it can affect the players.

"It can be hard to concentrate when that sort of sideshow is going on," he said.

"It makes it a lot easier when everyone is pulling in the same direction.

"It makes a massive difference when the fans are behind the team."