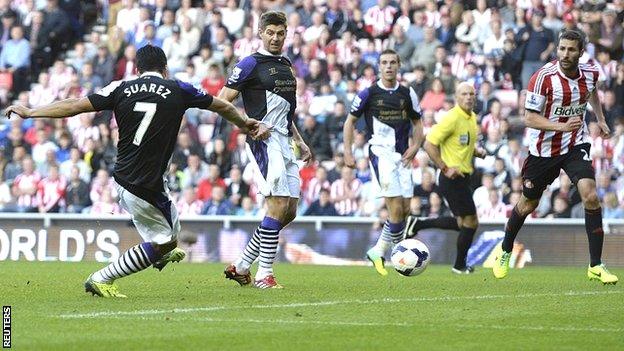 Luis Suarez marked his Premier League return with two goals as Liverpool beat Sunderland to go second in the table.

Playing in the league for the first time since 21 April after a for biting, Suarez twice tapped in after being set up by Daniel Sturridge.

Sturridge put Liverpool ahead at the Stadium of Light with a close-range effort that appeared to hit his arm.

Emanuele Giaccherini pulled one back for Sunderland in between the Suarez efforts, but the visitors held on.

At 2-1 the Reds would have sat third behind Tottenham on goal difference, but the Uruguayan's late third lifts them a place higher.

Suarez made his comeback in by Manchester United in midweek, but this was his first Premier League game of the season - and he formed a lethal partnership with Sturridge.

The pair condemned Sunderland to a fifth defeat of the campaign and, as the only top-flight club without a league win, they remain bottom of the table.

But the Black Cats, under caretaker manager Kevin Ball's guidance following the showed signs of improvement and had their most shots in a league game (23) since December 2011.

Ball's men showed predictable energy and desire in the early stages, passing and moving with con fidence and posing a threat going forward.

But for all of their positive play, the hosts lacked pace and cutting edge in the final third and looked vulnerable on the counter-attack.

Suarez threatened with an early drive before Martin Skrtel's strike was disallowed for offside after a Steven Gerrard free-kick was parried.

Sunderland replied with a Sebastian Larsson set-piece that struck the bar, but Liverpool's pressure told when an unmarked Sturridge converted Gerrard's corner from close range. Replays showed the ball went in off his arm, but the goal was allowed to stand by referee Howard Webb.

It was a blow that silenced the home supporters - and Sunderland's afternoon took another turn for the worse as Liverpool hit a second.

Sturridge collected Gerrard's brilliant cross-field pass with a stunning piece of control, eased past Carlos Cuellar and squared for Suarez to roll home a sixth goal in as many Premier League appearances against Sunderland.

The Black Cats worked hard to reduce the deficit before half-time and Craig Gardner, from what seemed an offside position, had a volley well saved by Simon Mignolet before Adam Johnson fired narrowly over.

Sunderland carried that momentum into the second half as Mignolet spilled Ki sung-Yueng's drive to Giaccherini for a routine finish.

Liverpool's earlier fluency was now absent and their opponents almost struck again when a deflected effort from Gardner was tipped to safety.

With Sunderland pressing for an equaliser and Liverpool attempting to secure a third, play became stretched and Jozy Altidore tested Mignolet before Moses, Suarez and Kolo Toure went close.

However, the points were sealed as Suarez led a breakaway, fed Sturridge and then took his return pass to fire into an unguarded net.

"We spoke at half-time and I thought you saw a great reaction. They gave it a really good go in the second half.

"We took it right to the death but unfortunately you're susceptible to that counter-attack where 3-1 - and I don't mean this as disrespect to Liverpool - flatters them a little bit.

"It was a shame because I thought the lads had a real good go today and that's something we need to take heart from."