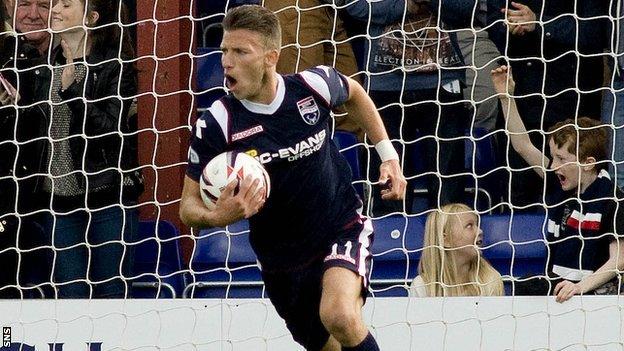 County were trailing going into the closing minutes but De Leeuw headed them level before the Dutchman crossed for Richie Brittain to node home.

"I'm delighted for him because he's had to wait for his opportunity but we've got high hopes for him," said Adams.

"Over the 90 minutes, I thought we played well. We created openings."

Callum Paterson gave the visitors the lead midway through the first half and Adams praised the travelling support for creating an exciting atmosphere.

I said to them at half-time, 'we're not doing too much wrong'

"They were fantastic from start to finish and if I was the manager of Hearts, I'd be delighted with the support that they get because if I'm a player, I feed off that," said the County boss.

"Obviously we fed off that as well over the 90 minutes. They're great for their club, they're a credit to their football club.

"Hearts were terrific at times and we dealt with whatever they put up against us but I think we deserved to take something out the game, there's no doubt about that.

"I thought that we started the game well and then, all of a sudden, we're a goal down.

"I said to them at half-time, 'we're not doing too much wrong, we just need to get that goal back and see where we go from there'.

"I always felt the team on the park were going to provide something. We made a change and De Leeuw came on. De Leeuw's very good at close control.

"He's scored a great header coming in from the left, that's what he's renowned for. But then he puts a ball into the box for Richie Brittain to score as well."