City captain Vincent Kompany said afterwards that the reason for the manner of their win was that victory may have meant more to his side than it did to United.

Their commitment was a big factor, because you don't win a derby without it, but Manuel Pellegrini's team also out-played United in every part of the pitch.

United were terrible without the injured Robin van Persie, but we should not play down how good City were.

Before Sunday they had not impressed me much so far under Manuel Pellegrini and I certainly did not see this result coming but, of all the top teams, it was the best performance I have seen this season.

It is a marker for the rest of the Premier League.

Vincent Kompany and Yaya Toure were both immense for City against United.

Kompany completely dominated Wayne Rooney for the first hour of the game, while Yaya Toure gave City a platform in midfield to force United back in a way we have not seen happen too often before.

The battle for that area of the park was hugely important and Toure bossed it.

Toure is being used as a defensive midfielder by Pellegrini and you can see from the graphic below showing his touches over the 90 minutes that he mostly patrols the part of the pitch either side of the halfway line.

He has the freedom to get forward too, but he and Fernandinho were given a job to do against United, and they did it. 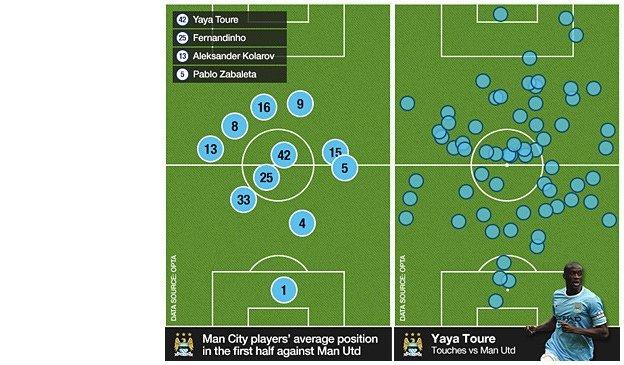 Pellegrini wants City to play possession football and, in Toure, they have the perfect player to help them do it. He played more passes than any other City player (52) on Sunday and he has played and completed more than anyone else in the Premier League this season too.

City were on top in the middle of the pitch but where they really hurt United was out wide.

Before the game, I thought City's right-winger Jesus Navas would be a real threat against Patrice Evra, and thought that was where a lot of their attacks would come from.

But, similarly, I thought United's right-winger Antonio Valencia would be their dangerman because he was up against Aleksandar Kolarov, who does not always want to defend.

In fact, it was on Valencia and Kolarov's flank where City were most dangerous. Their quicker passing helped force United back and it was their full-backs who were overlapping - especially Kolarov.

It was City's work-rate that was the real difference between the two teams, though, and the first goal was a great example of that.

Navas tracked back and played the ball to Joe Hart. From the goalkeeper's clearance, a poor header by Rio Ferdinand ended up with Nasri.

Nasri did exceptionally well to find Kolarov on the overlap but Valencia did not track Kolarov. He was very, very lazy and poor Chris Smalling was left in two-on-one situations a few times.

Why United were not a threat

Part of the reason Toure found it so easy was that he did not have to worry about Marouane Fellaini or Michael Carrick running in behind him.

Fellaini and Carrick were more concerned about Toure running on to them, and United had nobody getting into the box.

I did not expect Carrick to try to get forward but Fellaini also sat deep and he did not manage a touch in City's area until the 53rd minute.

Toure and Fernandinho were able to play as sitting midfielders (see City's average-position graphic for the first half, above) because City had won the battles on the flank and were getting people forward, whether it was out wide or centrally, and into the United box.

United did nothing out wide until City were 4-0 up and took their foot off the pedal.

The graphic below shows how far back they were forced during the first 45 minutes, a first half when Fellaini stayed very deep, Danny Welbeck was completely isolated and ineffective up front, and United created nothing - they had one shot, from Valencia, which was a long way off target.

I do not know why United bought Fellaini if they are going to play him in that position because that is not how you get the best out of him. 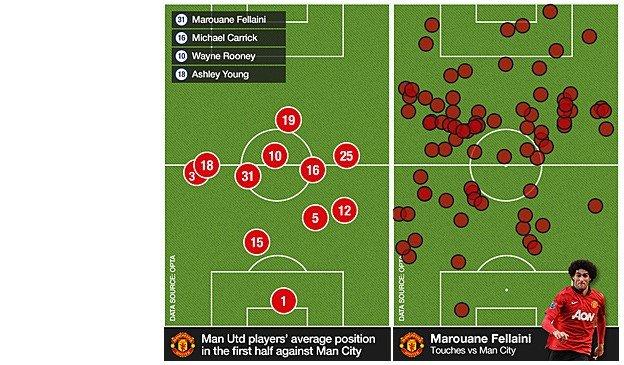 Against City, they needed him to try to burst forward and get into the box, which he started doing midway through the second half when he was pushed further forward, given a freer role, and actually forced Hart into his first meaningful save (after 68 minutes).

By the end of the game, his average position was a lot higher up the pitch and he had managed more touches in and around the City box (see graphic showing his touches above).

But defensively he struggled too. He did not manage a touch in his own area in the first half either, and lost Toure from the corner that led to City's second goal.

He was also guilty of a lack of communication after letting Sergio Aguero get away from him for City's third goal.

Ferdinand's position was all wrong at the near post when the ball comes across and he does not see Aguero, but there was no communication and, as a midfielder, if you are not passing your man on to your centre-half then you have to stay with him yourself.

Fundamentally, the goal was a defensive nightmare for United, and it summed up their day.

Rooney's performance was the one positive for United boss David Moyes but, now that Van Persie has missed his first Premier League game since moving to Old Trafford in 2011, we can see just how important the Dutchman is to them going forward.

It is the same for Kompany at City: they do not look the same at the back without him to lead or organise them. Even teams with big squads can miss one man more than any other.

But the question I am asking about United after the first few games of the season is whether some of their players are good enough? I have said before now that I don't think they will win the league - games like this one are part of the reason why.

The change that David Moyes made with his side 4-0 down, to bring on Tom Cleverley for Ashley Young, summed up for me how limited United's squad is in midfield. They do not have the quality they need against the top teams.