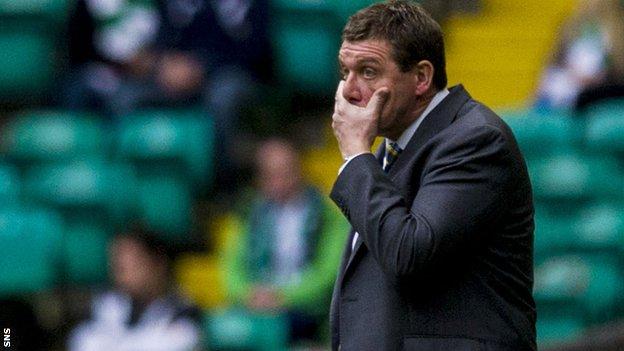 St Johnstone manager Tommy Wright has hit back at counterpart Neil Lennon for accusing Steven McLean of diving during over the Perth side.

Saints had a penalty claim waved away by referee Alan Muir with the home team leading 2-1 in Glasgow.

"There is no chance it was a dive," said Wright.

"I don't know exactly what Neil said, but I have a golden rule - I don't comment on opposition players. Maybe Neil shouldn't comment on mine."

Lennon had said that McLean "has a tendency to go down easy at times".

"If he is indicating it was simulation, I have never known him to be booked for that and players do tend to go down under a challenge," Wright responded.

"Steven said he had no reason to go down and he is an honest lad."

Wright also took umbrage at being quizzed as to why striker Stevie May, who has been in good form this season, started on the bench.

"We were doing well before we brought Stevie on," he said, reminding the gathered media that it was a similar starting line-up to the one that recorded a fine Europa League qualifying victory.

"There is no issue. I didn't pick him.

"That's the team I put out against Rosenborg, aside from Nigel Hasselbaink for Chris Millar.

"Because Stevie May was left out, you want to make an issue. There is no issue."