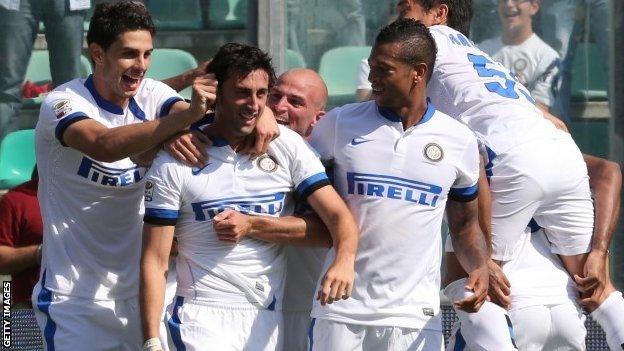 Inter Milan's Argentine players scored five goals to help their side to a superb 7-0 win at Sassuolo in Serie A.

Walter Mazzarri's side remain unbeaten in the league this season after four games, having won three and drawn one.

The last 11 Serie A derbies between Roma & Lazio have seen 16 red cards, seven for Roma, nine for Lazio

Roma maintained their 100% record with a 2-0 victory over Lazio.

Federico Balzaretti scored the opener in the Rome derby when he met Francesco Totti's cross with an angled volley at the far post, before Adem Ljajic scored from the spot in stoppage time.

Lazio's Andre Dias was sent off three minutes after coming on for blocking Totti late in the second half.

Roma lead Serie A with a maximum 12 points from four games, just ahead of Napoli on goal difference.

Rafael Benitez's side are the only other team to still hold a 100% winning record after earning a 2-1 win at AC Milan.

Elsewhere, Carlos Tevez and Fernando Llorente scored for champions Juventus in their 2-1 win over Verona. They have 10 points along with Inter and Fiorentina, who recorded a 2-0 victory at Atalanta.