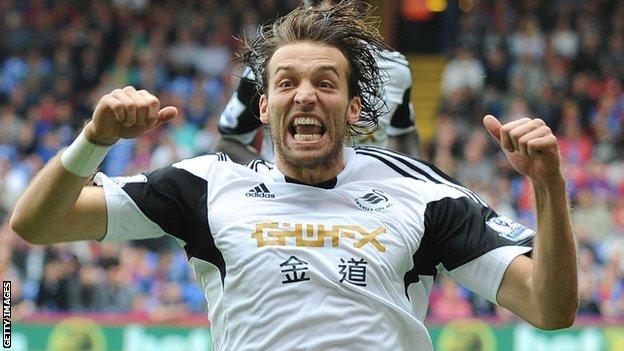 Swansea captain Ashley Williams hailed their "brilliant" performance after a 2-0 win at Crystal Palace in the Premier League.

Victory at Selhurst Park followed a home draw with Liverpool and a win in Valencia in the space of seven days.

Goals from Michu and Nathan Dyer early in each half sealed a one-sided win for Michael Laudrup's team in south London.

"It was a big week for the club and I think we performed really well," said defender Williams.

"I think it was a brilliant performance from us. It's what we wanted.

The game came only three days after Swansea' 3-0 Europa League triumph over Valencia in Spain.

Williams missed that game, but was impressed with the way the squad had handled the heavy workload.

"It's new for a lot of us," admitted Williams.

"But we're conscious of just trying to recover as quick as we can after the last game and just try to get your body right."

Swansea have two days off before they start their defence of the Capital One Cup against Birmingham on Wednesday night, with manager Michael Laudrup praising the strength of his squad.

The Dane believes the wins at Valencia and Palace take a little pressure off his players.

"I'm moving the squad and making some changes," said Laudrup.

"We're getting the results, we've built up a very good run.

"This was the second away win in the league, a second clean sheet and the third one in four games and I think that's really great.

"We have a cup game on Wednesday, but with these seven points it's a little easier, you know.

"I think after the first two games we played Man Utd, the champions and then Tottenham away. We knew it would be very difficult.

"We knew before the start of the season that the first seven games would be very difficult but we're already here, we have seven points - exactly the same as we had last year at the same stage."