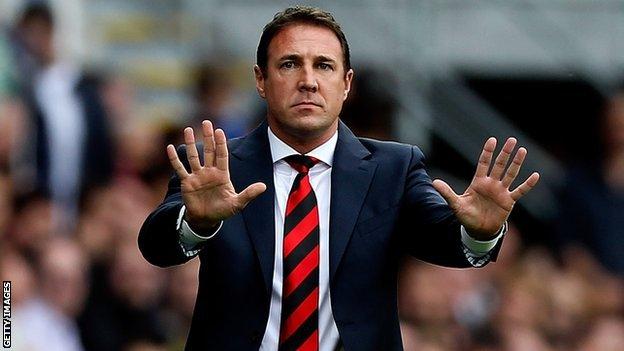 Cardiff City manager Malky Mackay described their as a "cruel day, not a bad day".

But Mackay was proud of his side, saying: "There will be bad days. Today wasn't a bad day. Today was a cruel day, not a bad day."

"Today's a day that showed the players that we've got at this football club that they can match top, top teams in the league," said Mackay.

"We've played three teams at Cardiff City Stadium that were in the top six last year and absolutely gone toe to toe with them and our fans have seen that.

"And it gives my players great belief going forward.

Lloris is a very lucky man tonight. He's the one that's actually holding Gunnarsson so it should have been a goal

"If the other goalkeeper [Spurs' Hugo Lloris] is worth £9m, which he was, then I think our goalkeeper [Marshall] is certainly someone that is rising in his stock and in confidence every week.

"He was widely acclaimed as the best goalkeeper in the Championship last season with very little argument and he's stepped into the Premier League and taken it in his stride.

"He looks very calm, very composed and had a fantastic, terrific performance.

"And a goalkeeper like that keeps you calm as a back four and that showed."

Ben Turner was denied a headed goal when Aron Gunnarsson was deemed to have held back Lloris.

And Mackay was disappointed that striker Fraizer Campbell failed to take an early chance while Gunnarsson also saw a good opportunity soar above the target late on.

"Lloris is a very lucky man tonight," said Mackay. "He's the one that's actually holding Gunnarsson so it should have been a goal.

"It's about being more clinical, but we matched a very good team, toe to toe again.

"We put them under pressure and I'm very proud of my players. They're a great group to work with and I'm glad I'm in the trenches with them this season.

"They're relishing the size of the task this season and are giving as good as they get.

"They're loving the fact that we're in the Premier League and we're actually competing."

Campbell was bearing down on Lloris when the goalkeeper took the ball from the striker's feet, leaving home fans convinced the Spurs keeper had handled the ball outside the penalty box.

Mackay said: "I'm more disappointed that... one v one we never scored.