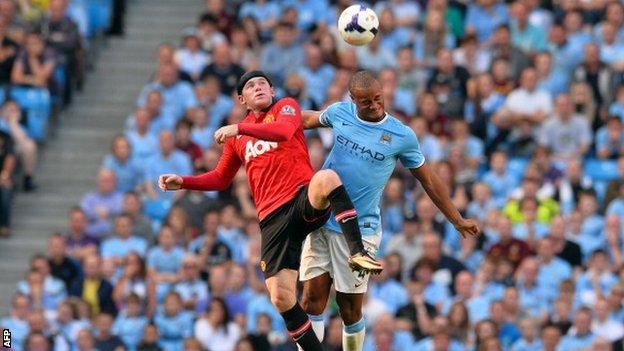 City crushed United 4-1 thanks to a brace from Sergio Aguero and a goal apiece for Yaya Toure and Samir Nasri before Wayne Rooney's late consolation.

"Maybe the game meant a little bit more to us than for them," said Kompany.

"We were looking forward to this fixture. We need to win these kind of games. There was no reason why we should fear the opposition."

City won 6-1 at Old Trafford on the way to winning the Premier League in 2011-12 but defender Kompany, 27, says the Blues should not get carried away with the latest thrashing of their local rivals.

"It's too early to say it's a defining game," added the Belgium international. "You make a statement over the course of the season.

"When we won 6-1 at Old Trafford I said we need to stay humble. It's only three points, but it's a good game to win and it gives the fans something to celebrate over the next few days."

However, France midfielder Nasri believes the victory sends out a warning to the rest of the league about City's title credentials.

"It was important to make a statement and we did it with this victory," Nasri, 26, said.

"We played well and deserved a 4-1 win. It's really special to win because we send a big statement to our rivals that Manchester City are going to be a force.

"We showed in our team we have big players and produced a big performance."

City boss Manuel Pellegrini says he was surprised at the margin of the victory, which sees the Blues climb to third in the Premier League.

"It was a great win and no-one believes that 4-1 is possible before the game," Pellegrini said.

"It's an important game and for the team. And for the fans they will be happy for the month now.

"Winning a derby is a big match and we must continue improving. Every day we are improving."