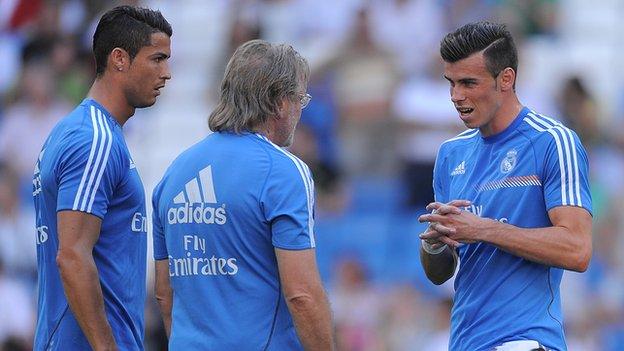 The 24-year-old was set to make his home debut against Getafe last Sunday, but pulled out after injuring his thigh in the pre-match warm-up.

"I think he will be ready for Saturday no problem," said Ancelotti.

"He was a bit sad after the Getafe game but changed quickly because he started to think about Saturday's game."

Bale, who signed from Tottenham for £85m in September, had a scan on Monday which diagnosed "fatigue in the left thigh muscle" according to Real.

The Wales international was replaced by Isco minutes before the start of Real's 4-1 win and will sit out Wednesday's La Liga trip to newly-promoted Elche.

Bale made a goalscoring debut for Real in the 2-2 draw at Villarreal and also came on as a substitute in the 6-1 victory over Champions League opponents Galatasaray.

Former Chelsea boss Ancelotti said that Bale's performance in those games showed that he had not been rushed into action too quickly after a pre-season disrupted by drawn-out transfer negotiations.

Real Madrid president Florentino Perez was at the centre of those talks and insists that Real's policy of big-money, big-name signings, that has brought the likes of Cristiano Ronaldo, Zinedine Zidane, Kaka, Ronaldo, David Beckham and Figo to the club, gives Real value for money.

"It was shown with Figo, Zidane, Beckham and Ronaldo. Even though they were very expensive, we went from losing money to making money."

Atletico Madrid are the only side other than Barcelona to maintain a 100% league record after five matches, with Real third on 13 points.