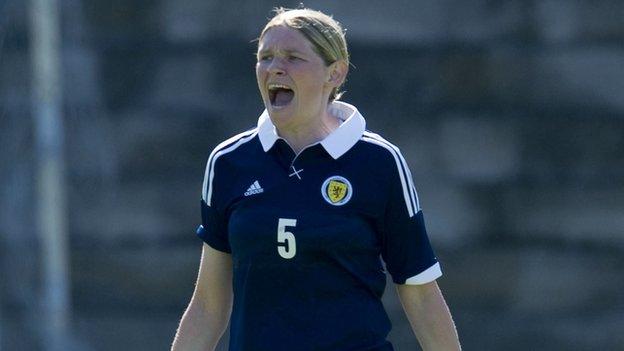 Rachel Corsie gave the Scots an early lead and further strikes from Lisa Evans, Jane Ross and two from Leanne Ross settled the game by half-time.

Suzanne Lappin and Suzanne Mulvey added to the scoreline after the break.

Two late goals from Heidi Sevdal gave the Faroes some reward for an improved second-half display.

But it is the Scots who secured the three points ahead of Thursday's second group game against Bosnia-Herzegovina at Fir Park.

The match at the Torsvollur Stadium began under floodlights, lashing rain coating the artificial surface and spectators were rapidly drenched before a ball had even been kicked.

The Scots were quickest off the mark, Lisa Evans with a shot at goal within the first two minutes. Evans then found her target just a minute later, a neat cross from Leanne Ross met smoothly by the midfielder, who headed home.

Scotland continued to press the home side while Olga Kristina Hansen tried to drive the Faroese up the pitch. However, it was the Scots who struck again on the 20th minute,

Wardum tipping a Leanne Ross shot into her own net to compound the Faroes' misery.

Barely a minute later, it was another Ross who added to Scotland's tally, Jane Ross firing home from a Leanne Crichton header.

As the rain continued in Torshavn, the Faroe Islands were now searching for answers as they struggled to contain the Scots' pace and technical ability.

Not to be deterred, Scotland found the net again on the 28th minute, Leanne Ross with her second of the night, courtesy of a ball in from Hayley Lauder.

After the break Scotland were keen to add to their tally, Anna Signeul bringing on Suzanne Lappin for Glasgow City team mate Crichton. It proved an inspired move, as after just two minutes on the pitch, Lappin hit home from a low Evans' cross to make it six goals for the visitors.

The Faroese, though, continued to improve. Heidi Sevdal had a chance to convert from just inside the 18-yard box with a curling effort at goal but the shot failed to trouble Gemma Fay.

The home side finally made an impression with two consolation goals. Sevdal picking up an Olga Kristina Hansen ball before outfoxing Jenny Beattie and with a lovely run through the centre, finding the net.

With just seven minutes remaining, Sevdal was on hand again for the Faroe Islands, finding space on the left to send a looping shot home.