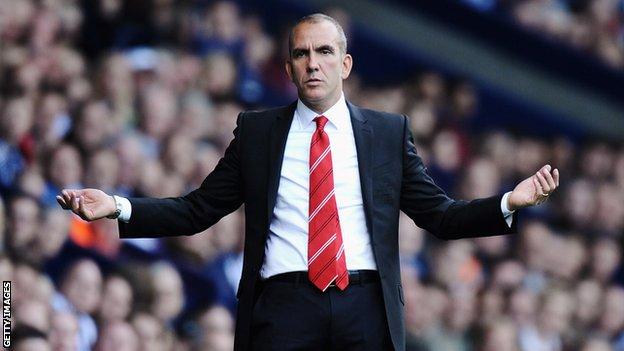 Six months and 13 games. That is how long Paolo Di Canio lasted as head coach of Sunderland.

Few predicted the fiery Italian would last the season, but even his harshest critics will have been surprised he was sacked only five games into the new campaign.

A short statement from Sunderland confirmed his departure on Sunday evening, ending an era that was often as controversial as it was entertaining.

When Di Canio was appointed back on 31 March, Sunderland were in danger of being relegated to the Championship.

On being appointed: "I am the unique one. I am joking, actually I'm not. I am at the beginning of my career. One day we will discover that I am either a fantastic, good or normal manager."

On living in the north east: "I am staying close to the sea and I can tell that the sea looks nervous as if something might happen."

On 'arrogant' players: "What sense of responsibility have they got? They live five minutes from the Academy of Light. I was waiting there in the corridor - three, four players arrived by walking. Not - I can imagine, you are late, you run, you sorry - this is the behaviour in a Premier League club, a club that spends millions and millions. It is not acceptable."

On taking responsibility for poor performances: "I will absorb everything. I don't have a problem with that. I will accept the weight of the building coming down onto my shoulders."

The Black Cats sat one point above the relegation zone, having failed to win in eight league matches under previous manager Martin O'Neill.

The Italian's first match in charge ended in a narrow 2-1 defeat at Chelsea but Sunderland's performance showed promise.

However, in their next game he immediately earned himself a place in the hearts of Sunderland fans as they emphatically beat fierce rivals Newcastle 3-0 at St James' Park, a result that prompted the memorable scene of a knee-sliding, fist-pumping celebration.

A 1-0 win at home to Everton followed and though Sunderland suffered a hefty 6-1 defeat at Aston Villa, two draws and a defeat from the final three games was enough to secure Premier League survival.

Over the course of those seven final weeks of the season, Di Canio charmed and entertained with eccentric news conferences and his touchline antics.

Once summer arrived, he set about instigating a raft of changes. Working alongside director of football Roberto De Fanti, the squad was completely overhauled as 14 new players came in, while a new regime heavily based on fitness was introduced.

Never one to avoid the limelight, Di Canio's openness in the media meant that in his short spell in charge of the club, his many rants and tirades created negative headlines.

Not long after his appointment, he took a thinly veiled swipe at his predecessor O'Neill, lamenting the fitness levels of the squad he inherited, while he was not afraid to publicly criticise players.

In May, he dropped Phil Bardsley from his squad after the defender was pictured in a casino. He also fined seven players and threatened to reduce their holiday if they did not perform "with dignity" in their final Premier League game last season.

Those comments resulted in him being investigated by the Professional Footballers' Association, with players' union chief Gordon Taylor saying Di Canio could not be "a law unto himself".

After a relatively quiet summer, the new season brought with it more moments of controversy.

Bardsley was suspended following comments he was believed to have made on social media, before Di Canio criticised his captain John O'Shea for what he called a "terrible" red card in his side's 3-1 defeat by Crystal Palace at the end of August.

A game rarely came and went without Di Canio saying something to ensure his name dominated the headlines.

Earlier this month, he asked referee Martin Atkinson to send him off - which he promptly did - as Sunderland lost 3-1 to Arsenal. After that, he accused former player Stephane Sessegnon, who joined West Bromwich Albion on transfer deadline day, of "not caring" for the Black Cats.

A turbulent few days followed his appointment, with front and back pages of newspapers dominated by Di Canio.

He was repeatedly questioned and criticised over his political views, while former UK Foreign Secretary David Miliband resigned from his positions as vice-chairman and non-executive director of Sunderland in protest.

Di Canio initially refused to answer questions on his beliefs in news conferences, but he eventually renounced his links to fascism, three days after he had been named manager.

His final, and perhaps most bizarre, act as Sunderland manager came moments after the final whistle at the 3-0 loss at West Brom on Saturday.

He walked across the pitch to stare at angry away fans, made 'chin up' gestures before heading back towards the tunnel.

At that moment one fan could be seen to say "you're getting sacked in the morning".

Ultimately, he was not far from the truth.