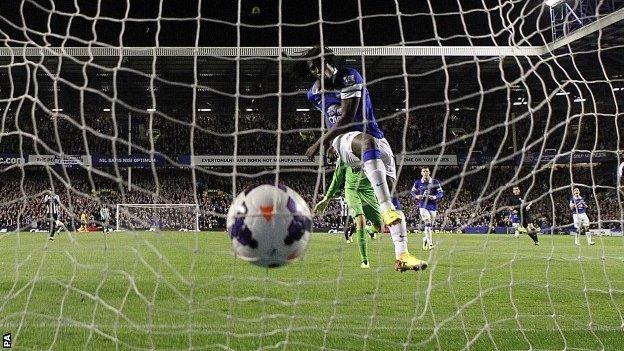 Everton's unbeaten start to the Premier League season continued as they moved up to fourth with an excellent display against Newcastle.

Loic Remy's late strike ensured a nervy finish for Everton, who deserved the win after taking a 3-0 first-half lead.

Romelu Lukaku opened the scoring at the near post and prodded in the third, either side of feeding in midfielder Ross Barkley for his well-taken goal.

Yohan Cabaye's superb shot made it 3-1 before Remy poked home.

The French striker then almost levelled for the Magpies with a stoppage-time strike that flew just a foot above the Everton bar.

Had he scored and rescued a point for Newcastle, it would have been a bitter and unjust blow for Everton, who were outstanding, especially during the first 45 minutes.

Roberto Martinez's side were sharp, showed great movement and closed down the opposition superbly.

And they remain unbeaten in the Premier League under the Spaniard, who succeeded David Moyes in the summer, ahead of a trip to Manchester City on Saturday,

Their first goal came after five minutes when Belgium international Kevin Mirallas left Newcastle full-back Davide Santon trailing and sped down the right flank before delivering a low ball for compatriot Lukaku. The 20-year-old, on loan from Chelsea, produced enough power with his strike at the near post to beat Tim Krul.

Everton came close to doubling the lead straight from the restart, when Barkley's snap-shot whistled past the left-hand upright.

The England international was on loan at Sheffield Wednesday last season, but has been given a key role in midfield this season by new manager Martinez.

And the 19-year-old made Newcastle duo Moussa Sissoko and Cheick Tiote look like sluggish veterans.

The Everton youngster scored his side's second with a well-placed finish from 15 yards after Lukaku showed both his physical superiority and craft in one move to turn his marker and set up the chance.

The first two goals came as a result of poor defending, and the third was no different.

This time, goalkeeper Tim Howard's long kick was misjudged by Fabricio Coloccini to allow in Lukaku, who got the faintest of touches to push it past Krul and walk the ball into the empty net.

One of the changes had an immediate effect for the Magpies. Moments after the restart Yoan Gouffran saw his dinked effort come off the post before Cabaye, who did not start because of a groin problem, smashed a fantastic 25-yard shot into the top corner.

Newcastle's purple patch lasted 15 minutes and they had another spell of pressure very late in the game.

Remy, one of Newcastle's better players on the night, beat Everton captain Phil Jagielka to Mathieu Debuchy's header into the six-yard area and poked the ball beyond Howard.

The France striker, on loan from QPR, then saw his powerful drive fly a ball's width over the bar.