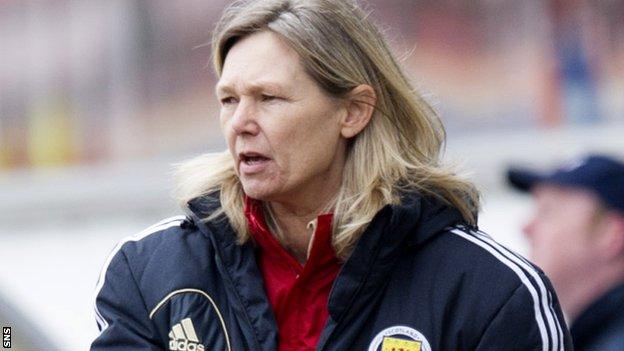 Anna Signeul says Scotland face a difficult task to qualify for the 2015 World Cup despite crushing Faroe Islands in their opening qualifier.

The Scots opened Group 4 with a 7-2 victory in the Faroe Islands and host Bosnia-Herzegovina on Thursday.

"Of course we go into this campaign and we want to qualify," said Scotland coach Signeul.

"It's just the group winner that goes to Canada. That'll be difficult, but we'll certainly give it a good try."

In addition to the seven group winners, the top four runners-up go into play-offs to decide the eighth European berth at the finals in Canada.

But Sweden, who are ranked fifth in the world and were European Championship semi-finalists, are strong favourites to top Group 4 and started their campaign with a 2-0 home win over Poland.

Signeul was pleased with a "really convincing" first half in Torshavn while admitting that conceding two goals was slightly disappointing.

It's always nervous in the beginning with the first game, but I thought it was a great performance from the players

"There's no easy games nowadays in football," she said. "Not in the women's side either. All teams are well organised."

Signeul declared herself happy with the performance on an artificial pitch in driving rain.

"We are very pleased," said Signeul. "It was a fantastic start. It's always nervous in the beginning with the first game, but I thought it was a great performance from the players.

"It wasn't easy to play in because it was very rainy the whole game. We played on astroturf, so it was really quite fast.

"The Faroe Islands team were sitting quite deep the whole time, so it was difficult to get any space."

Next up for Scotland is a home encounter at Fir Park with Bosnia-Herzegovina, who arrive in Motherwell having finished fourth behind Poland in their European Championship qualifying group.

Signeul admits the Balkan side are something of an unknown quantity.

"It will be our first game at Motherwell, so that'll be interesting," said Signeul.

"We don't know so much about the Bosnians, which is a little bit of a worry, but we've studied them as best we can on DVD.

"I think they are more technical than the Faroe Islands - very well organised also."