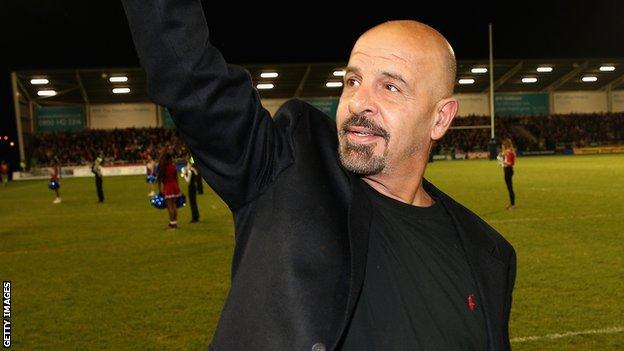 Dr Marwan Koukash has been asked to make his intentions clear for Oldham Athletic after he expressed interest in taking control of the League One club.

Koukash, the owner of Super League side Salford Red Devils, has said he would like to purchase the Latics and another rugby league outfit, Oldham Roughyeds.

But Oldham Athletic's board say the two parties have had little contact.

"If he's serious about what he intends, all he has to do is arrange to meet the chairman and ourselves and make a firm bid. Then we'll look at it."

If the right bid came in and it was in the interests of Oldham Athletic, it would always be considered

Speaking before the on Saturday, Owen continued: "It's no secret that [chairman] Simon Corney did speak to Marwan a few months ago, but since that time we've heard nothing whatsoever.

in January, and although the club finished bottom of Super League in 2013, optimism for the future is high following

and his plan is to take control of the football and rugby clubs in Oldham with a view to building a new stadium to house them both.

Roughyeds chairman Chris Hamilton confirmed last week that he has held "positive" talks with Koukash over his plans for the Championship One club.

"We are still in the early stages, with a lot of work to be done, but we will continue with the process in terms of moving things forward," said Hamilton.