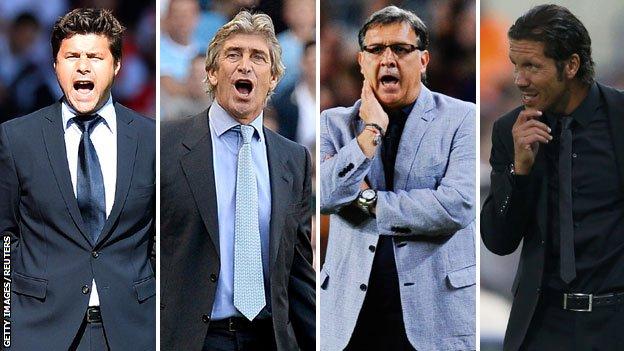 For more than an hour in last Wednesday's Champions League matches, up and down the continent, every goal had been scored by players from either Argentina or Brazil - an extraordinary example of South America's contribution to European club football.

In comparison to the impressive feats of the players, surprisingly little of that contribution has come from coaches. There have been a few South American success stories on the other side of the Atlantic - Brazil's Otto Gloria and Chile's Fernando Riera spring to mind.

But opportunities have been limited - hence the general surprise when Argentina's Gerardo Martino was rushed into the Barcelona job, an appointment which suggests a desire to keep Lionel Messi content.

The modern dressing room of a major European club is a mini working class version of the United Nations, containing players from all sorts of nationalities and cultural backgrounds

In this case, the fact that the club's biggest star is from Argentina has opened a door. But paradoxically, the fact that European football has become so globalised almost certainly makes it more difficult for South American coaches to find their feet.

There are three main tasks a coach must perform; select the team, determine the strategy and set the emotional tone for the work. All demand adjustments - in a tactical sense, for example, European club football is far quicker than South American. But perhaps the biggest challenge comes in the third of those tasks, which encapsulates the difficult mission of man management.

The modern dressing room of a major European club is a mini version of the United Nations, containing players from all sorts of nationalities and cultural backgrounds. There is nothing in South American society that can prepare a coach for dealing with such human diversity.

Many of the local coaches are essentially group formers - one thing when all the players come from similar backgrounds, but quite another when they are gathered from the four corners of the globe.

I was discussing such topics on a Brazilian radio show last Saturday, when the point was made that the local coaches are so often forced into the role of father figures.

The key word used by one of my fellow debaters was 'carente' - it can translate as 'needy,' in both economic and emotional terms, and the two senses can apply to the backgrounds of some of the players in the local teams. They can be crying out for a paternal figure in a way that is not always the case with European players.

Luiz Felipe Scolari discovered this in his time with Chelsea. He is a champion group former - in Brazil his squads are often referred to as 'the Scolari family,' but he was unable to generate the same unity in London.

Indeed, he lamented afterwards that his relationship with some of the players never got beyond a purely professional one. In retrospect, it is hardly surprising that his time at Stamford Bridge was not an overwhelming success.

It is also hardly surprising that the South American coaches most likely to succeed across the Atlantic are those who have played for European clubs, and have picked up experience of multi-cultural dressing rooms. Diego Simeone at Atletico Madrid is one example. Another is Southampton's Mauricio Pochettino, from a tiny Argentine town called Murphy, and transformed into a global citizen by his time in Spain and France.

All this goes to show that Manchester City's Manuel Pellegrini is something a little special. Nothing more than a useful centre-back, his playing career was restricted to Chile. Gerardo Martino is a legend at Newell's Old Boys, the Argentine club where Messi plans to end his career.

Pellegrini the player enjoyed none of that status. But he has gone on to carve out an exceptional coaching career, coming to City after sound work with a succession of Spanish clubs, Real Madrid among them.

A qualified engineer, Pellegrini is clearly a highly educated man. And he had the opportunity to learn from Fernando Riera, Benfica's coach in the early 1960s who was in charge of the Universidad de Chile side Pellegrini played for in the late 1970s.

Who is Manuel Pellegrini?

But more than the benefits of any formal education, what comes across so often with Pellegrini are his personal qualities, his suave and urbane capacity to remain unflappable.

A typical move was his pre-season opinion that he possesses the strongest squad in the Premier League. It leads to an obvious conclusion; if things go wrong it can only be his fault, since he has been given the tools he deems necessary to complete the job. He is happy to take on such pressure. It is part of what makes him so impressive.

A coach in Brazil who shows similar characteristics is Cristovao Borges, currently in charge of Bahia. A midfielder in the 1980s, he spent years as an assistant, only launching his coaching career just over two years ago at Vasco da Gama when his boss, Ricardo Gomes, suffered a stroke.

After coming close to winning the 2011 title with Vasco, he was appointed Bahia coach on the eve of the current Brazilian Championship. They were seen as sure fire relegation candidates. Instead, they lie solidly in the middle of the table, and their 2-1 win away to second place Botafogo was one of the best displays I have seen from a Brazilian side this season.

His team were compact in defence and incisive down the flanks. They bore the hallmark of a well coached side - it was easy to see what they were trying to do, both at the start and as substitutions had to be made after conceding the first goal.

Calm and ethical - at Vasco Juninho Pernambucano once complained that he was not putting enough pressure on the referees - Cristovao Borges is already 54, and is unlikely to enjoy the same kind of international career as Manuel Pellegrini. He may well be too self-effacing for his own good. But he is one to watch.

Q. Just wondering if you could share some insight into what extent the game of futsal influences the development of players in Brazil.

Is this the sole reason they are more skilful or are there others?

Futsal is clearly important, but I'm a bit sceptical about people trying to present it as Brazil's big secret. There is obvious value in small sided games with lots of contact with the ball - just as traditionally happens in the greatest producer of footballing talent known to man, informal street/park/wasteland football.

Brazil was coming up with skilful players long before the era of mass futsal. Perhaps the truth is this - many of the spaces where informal football was played have been swallowed up by urban expansion, or have become violent, and so futsal is a replacement.

But anyway, I think the main reason that they come up with more skilful players is that different cultures place high values on different aspects of the game. English football is the product of early, labour-intensive industrialisation, where physical strength and reliability were important - hardly surprising, then, that these values have always been a key part of our game.

Q. There seems to be at least one black player in every Argentine team. Is this a conscious decision or something suggested by Fifa/the South American federation?

A. No, not at all. It's because Argentine clubs often sign players from Colombia and Uruguay, some of whom happen to be black.

A couple of centuries ago, Buenos Aires was a third black. Then Argentina stopped importing slaves, and the black population diminished; some died of yellow fever, others joined San Martin's army and went to fight in Peru, and then in the late nineteenth and early twentieth centuries the country was transformed by the millions of immigrants pouring in, especially from Italy.

But there is still an African presence in Argentina's DNA. Hector Baley, for example, reserve goalkeeper in the 1978 World Cup, is an afro-descendent.