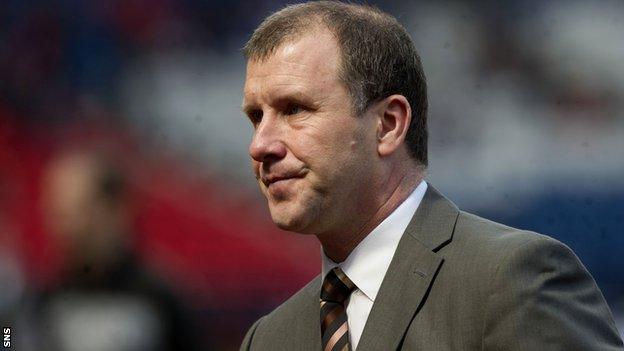 Scottish FA chief executive Stewart Regan insists that the absence of a sponsor for the professional leagues is not an embarrassment.

The newly created Scottish Professional Football League has yet to find a main commercial backer.

Clydesdale Bank's sponsorship of the top-flight ended in the summer.

Speaking at Hampden as the new Lowland League agreed a sponsorship deal of its own, Regan said the SPFL is "working hard" to resolve the problem.

The Scottish Sun newspaper will sponsor the Lowland League, which was launched by the Scottish FA this season as part of a new pyramid system for qualification into the senior set-up, for an undisclosed sum.

William Hill's deal to sponsor the SFA-run Scottish Cup continues until 2014, while the SPFL inherited Ramsdens as the sponsor of the Challenge Cup.

But SPFL chief executive Neil Doncaster has yet to conclude a deal of the four new leagues under his control - the Premiership, Championship, League One and League Two.

"It's not embarrassing at all," said Regan. "It's about finding the right sponsor and that's a matter for the SPFL.

"That's obviously a question for Neil Doncaster, but certainly there's a lot of work going on to find not just a sponsor but the right sponsor.

"Now that league reconstruction has taken place, those conversations are occurring and I know Neil and his colleagues are talking to a number of potential partners."

"It is indicative of the climate we're operating in," he said. "Scottish football has gone through a huge amount of change and reconstruction and major issues over the last couple of years.

"The season's under way and now it's really now about finding the right partner to work with."

However, Regan repeated his contention that there are , such as Celtic's progress in the Champions League and improved performances by the men's and women's senior sides as well as at age-group levels.

Regan was dreaming of a time when a club from the Lowland League could progress all the way up the structure until they were competing at the top in Europe.

"This is very much a piece of the jigsaw," he said. "We have a Highland League - this is a mirror image for the bottom half of Scotland and it allows ambitious clubs to progress through the pyramid for Scottish football and hopefully achieve what other clubs in Europe have done and go from playing on the parkland to eventually playing in the Champions League."