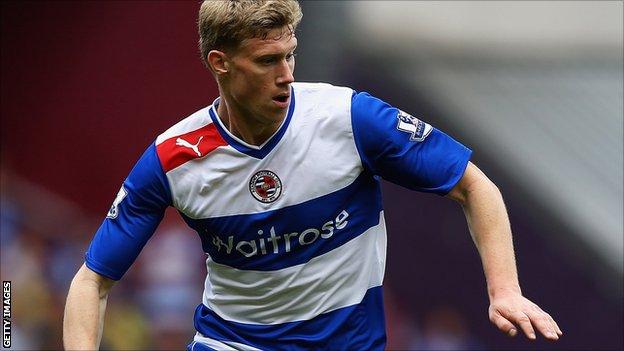 Reading striker Pavel Pogrebnyak says despite having the opportunity to leave the club in the summer he is fully focused on helping the Royals win promotion back into the Premier League.

Pogrebnyak, 29, scored his first two goals of the season on Saturday to help Reading defeat Derby 3-1.

In scoring his brace against Derby, Pogrebnyak ended a run of 16 Reading matches without a goal, stretching back to 12 January.

"I hope we will be in the top two and we must work hard for this," he told BBC Radio Berkshire. "I hope we can.

"I had some opportunity to go, but I don't want to speak about it anymore."

He added: "Now my head is with Reading and I want to work hard to help the team get into the Premier League."

The former Fulham forward began the season out of favour at the Madejski Stadium but a meeting with manager Nigel Adkins to resolve his future saw his re-introduction into the starting line-up.

And Pogrebnyak's goals against Derby meant the Russian ended a bad week on a high, having been sent off in the 0-0 draw against Brighton last Sunday.

"They were my first two goals of the season but I'm happier the team won," he said.

Usually the fans sing for Adam Le Fondre, but today they sung for me

"It was difficult after the game against Brighton - I just needed to keep going and keep my head up and today was good."

Pogrebnyak, who is still yet to win over many Reading fans, hopes if he can continue scoring his goals will help fire them into the Premier League following relegation last season.

"Of course it's important for the fans to like me," he said. "Usually they sing for Adam Le Fondre, but today they sung for me.

"I did not expect the Championship to be so hard. You must be good physically and work hard every game.

"I hope we will be in the top two and we must work hard for this. I hope we can."