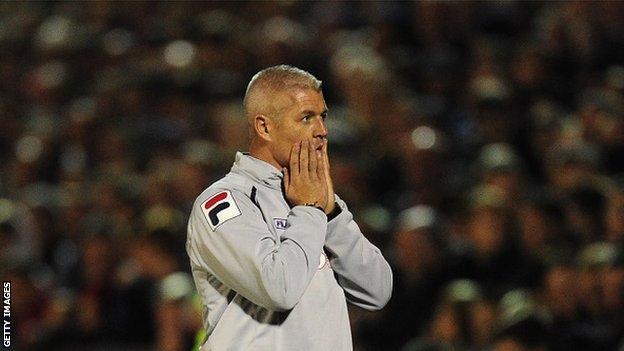 Caretaker boss Graham Kavanagh has put himself into pole position to become Carlisle United's next manager after overseeing consecutive victories.

Saturday's 1-0 win at Stevenage lifted the Cumbrians to 15th in League One and maintained Kavanagh's 100% record since taking over.

The former Stoke, Cardiff and Republic of Ireland midfielder told BBC Radio Cumbria: "I think everyone can see I've done myself a little bit of a favour.

"Let's see what this week holds."

He added: "I've said from the outset I want the job, and I think we're showing we - because it's about all the staff - are capable of doing the job."

Kavanagh was assistant to Greg Abbott when Abbott was sacked two weeks ago after the club had lost four and drew two of their first six league games of the season.

But in Kavanagh's first game in control they beat Sheffield United 1-0, and the club's first-ever win at Stevenage means the Irishman is now favourite to become United's next full-time boss.

"As we are at the moment we look a very good counter-attacking team, and there's no shame in that, that's the way we set up. We have to absorb pressure but we have the pace and ability to give teams problems on the counter.

"Nobody will rest on their laurels, the staff have been really good at driving that, and the players have bought into it. The lads will work extremely hard, and we go again.

"I keep going back to the word 'intelligence' but it's a huge word. To see the players and the way they are, the euphoria and the togetherness, the feeling and the energy, it's absolutely top drawer.

"I am going to ask them can we go again, because if they can the next result will look after itself."