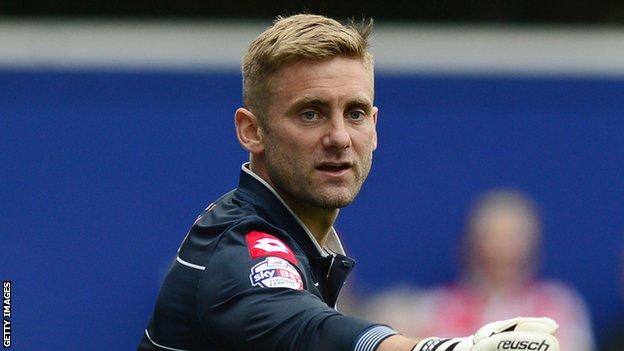 QPR goalkeeper Rob Green says manager Harry Redknapp deserves credit for rebuilding the side this summer after relegation from the Premier League.

The R's are top of the Championship table after an unbeaten start.

"It is pretty much an unrecognisable team from last season," Green told BBC Radio 5 live.

"The manager has done a great job in the change of personnel and acquired people who are going to do their utmost for the team."

Several high wage earners have been sold or have left on loan, while Redknapp has brought in nine players, including striker Charlie Austin and winger Matt Phillips.

"It is a league which isn't easy and no-one underestimates," added the 33-year-old stopper.

"We are slightly guilty of underestimating last season.

"It is a tough league and you need certain personnel to have a successful season."

QPR's start to the league season, unbeaten after eight league games, has been built upon a solid defence.

The Loftus Road club have the best defensive record in the Football League, having conceded only two goals, and have kept six consecutive clean sheets.

Rangers have gone 595 minutes without conceding although Green is more concerned with their performances than records.

"I am not bothered working it out," he said. "It's nothing you think about too much.

"It's pleasing these things happen and to be part of a successful team. Last season was difficult, where I wasn't part of a team that was struggling.

"Against Birmingham and Brighton I did not have a shot to save.

"The lads [in defence] have been superb and kept the chances down to a minimum and given the opportunity for the lads to play with confidence. Hopefully that continues.

"You just keep going about your business, doing the same things and not getting carried away."

The west London club moved three points clear at the top of the Championship with their 1-0 win at Yeovil on Saturday and, with new players settling into the team and Redknapp still looking to bolster his squad with loan signings, Green believes QPR have the potential to improve.

"I don't think we had a shot on target other than the goal," added the England international.

"We were under a fair bit of pressure and it was probably our least convincing performance of the season but in this league it is about grinding out wins.

"It is inevitable you are going to be under the cosh at times.

"To come away with a win and a clean sheet, without playing your best, is pleasing for the team.

"We have got a lot more to come from the lads, as long as everyone stays fit and gets match fit."