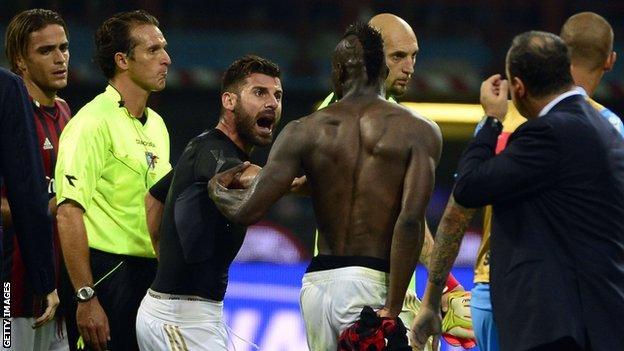 Mario Balotelli has been banned for three matches for using "intimidating and insulting" words to the referee after AC Milan's 2-1 defeat by Napoli.

He was sent off at the final whistle after clashing with Napoli's Valon Behrami and arguing with the official.

In a typically eventful performance, the Italy striker missed a penalty for the first time in his career before superbly netting in stoppage time.

Milan have opted not to appeal against the ex-Manchester City player's ban.

Balotelli will therefore miss the Serie A games against Bologna, Sampdoria and Juventus.

Milan coach Massimiliano Allegri said: "Mario is 23 years old, he is no longer a child.

"Mario has made a mistake, penalising the team, the club and the supporters, and he must change this behaviour."

Balotelli, who also hit the crossbar against Napoli, received his second booking after remonstrating with Behrami and referee Luca Banti at the San Siro.

Italian league bosses have also ordered Milan to close its Curva Sud stand for the next home game against Sampdoria as punishment for racist chanting by supporters during the Napoli defeat.

It was another miserable night for the Rossoneri, who are 11th in the Italian top flight after taking four points from their first four matches.

Mario Balotelli missed the first penalty of his career against Napoli - he had netted his previous 21 attempts.

Napoli goalkeeper Pepe Reina, who joined on a season-long loan from Liverpool in the summer, maintained the two-goal lead by saving Balotelli's 61st-minute penalty.

Balotelli, 23, was Milan's biggest attacking threat and, after having another penalty appeal rejected, reduced the deficit in added time with a wonderful 20-yard curling shot.