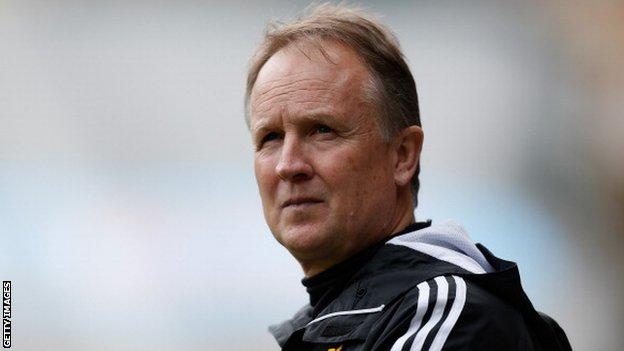 Bristol City head coach Sean O'Driscoll has said he is seeking to sign a centre-back to ease a growing injury crisis in defence.

James O'Connor is set to be out for up to four months after suffering a thigh injury in Saturday's loss at Swindon, while Aden Flint is also a worry.

O'Driscoll said: "We are seeing who is out there to see if we can bring somebody in.

"We were always short in that defensive area," he admitted.

City's injury concerns mean that their only fully fit out-and-out centre-back ahead of Tuesday's Capital One Cup match at Southampton is Derrick Williams.

O'Driscoll told BBC Radio Bristol: "It's disappointing for Jimmy O'Connor to pick up something that at first looked innocuous but which looks now like it's more serious than we first thought,

"He has a scan on Wednesday and that's doesn't look too promising. I think he's going to be out for three or four months.

"Jimmy was a blessing for us. His versatility was key because of the number of positions he could play."

Flint is a doubt for the trip to St Mary's because of a knock sustained at Swindon, while fellow defender Louis Carey missed training on Monday with a bug.

O'Driscoll added: "We've got a few problems. We've got various bumps and bruises.

"If Aden pulls up tomorrow then we will struggle for a new defensive pairing against a Premier division outfit."