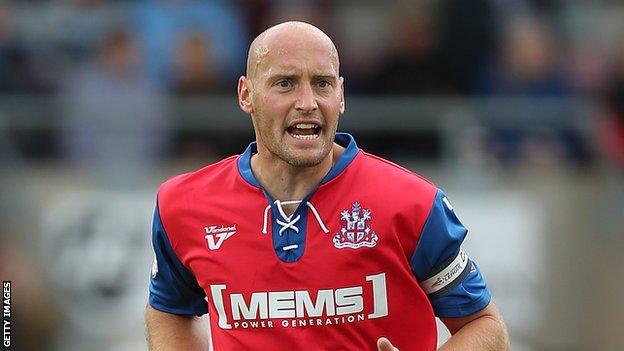 Gillingham captain Adam Barrett says he will have to try and keep spirits high following their winless start.

The Gills are bottom of the League One table after eight games.

He told BBC Radio Kent: "As a senior pro I have got to help some of the less experienced players through it.

"We all go through sticky spells in life and football and I've been in tricky situations before. You have just got to keep the belief there and confidence as high as possible."

The 33-year-old added: "I am captain of the club and very proud to be.

"It is my job to make sure the lads keep their chins up. It is difficult because we all want to do well and supporters are frustrated."

The Priestfield Stadium outfit suffered their fifth league defeat of the season when they were beaten 1-0 at home by Bradford on Saturday.

Barrett helped Gillingham to the League Two title last season and he says it is crucial they remain united following their start.

"We come into this season full of confidence," the centre-back said.

"We knew we had a tough start on paper and sometimes the longer you go without that win, it can be difficult.

"We are finding that at the moment but we have got to stay together.

"We have got good characters so I am sure we can pull through this sticky period."

With the Kent club currently just three points behind 17th-placed Crewe, who are their next opponents, Barrett is adamant they can climb the table quickly once they pick up their first victory.

"There is a long way to go and a lot of points to play for," he said.

"If you go and get a couple of results you can easily get out of it but we want to get there sooner rather than later.

"We'll take anything at the moment - any scrappy win. We need to get off the mark."